Jennifer and her husband purchased their Yamaha Rhino 660 in May of 2006 because they though it would be a good physical activity to enjoy together. Neither dreamed the Rhino would flip while making a very slow turn, leaving Jennifer in the hospital for 13 days.

"We live in a good place to be outdoors," said Jennifer. "We enjoyed the Rhino together. I could ride beside him—it's set up like a little car, not on the back clinging to him."

It was a gorgeous June day, a Sunday afternoon, and they were getting ready to head back home on their Yamaha Rhino. They were on a straight stretch of gravel road and had slowed way down to turn.

"He stepped on the gas as we turned—not fast. We had pretty much stopped as he started turning. He gave a little gas; nothing crazy and the tires grabbed and flipped us over on the passenger's side. It was the side I was on and with no door, my right leg went outside the unit and the roll bar crashed down and landed on the inside of my ankle. 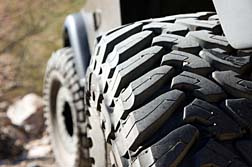 She spent 13 days in the hospital and said her injuries were pretty gross. Every bone in her ankle was shattered with an estimated 1,500 pounds landing on it.

"It's all pins and hardware in there. I was off work for six weeks," said the dental assistant who found the pain didn't allow her to stand for much of the day. "Then I went back as the receptionist so I could sit all day while I recuperated. I healed for six more weeks, then went back to dental assisting intermittently with reception."

She said life pretty much stopped for her for that year-and-a-half. All she thought about was her ankle, the pain she was in, the trauma, and the fact she wasn't earning as much as she did before the Yamaha Rhino accident. All together, between lost income and out of pocket expenses, Jennifer estimates the cost of the accident to be at least $40,000. She even had to exhaust her savings to meet her financial obligations.

"I felt helpless. I felt like I was not contributing," she said. "I was a drain on everyone. They all kind of looked after me and I looked after my leg. That's about it."

More News
Her husband still suffers from the guilt he feels about being the driver of the Yamaha Rhino the day it flipped over. Jennifer still walks with a mild limp and her leg still gets sore.

"There's daily pain. I've got arthritis in the joint. I can't wear high heels anymore. I can't run anymore. I wanted to go to Mexico and snorkel again and I don't know if I will have the strength," she said. "Even the piano, I had to learn to play the foot pedal with my left foot not my right foot."

She said she has to be extra careful walking on uneven or snow-covered surfaces as she often feels her leg is weary due to some nerve damage.

As for the Yamaha Rhino, her husband built big solid doors for it. Jennifer said they didn't want anyone inside the Rhino until doors were added and they didn't like the Yamaha doors that became available.

"Our doors are twice and high and twice as safe as the Yamaha doors," she said.