Summer is the time of year when ATV accidents hit their peak, as warm weather and the summer holiday combine to drive families out into the fresh air, and onto their all-terrain vehicles. Sadly, this is the time of year that will significantly add to the death and injury toll.

That's why the State of Florida has made it illegal for children younger than 16 years of age to drive, or even ride on public lands without completing an approved safety course. The new regulation kicks in July 1st. 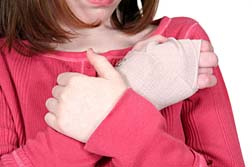 "Any safety program that can reduce the number of injuries to our young people is worthwhile," said Diana Smith, 4-H coordinator for Manatee County, which began an ATV youth safety program in 2002. "We've had a tremendous amount of children killed on ATVs. That's why we were involved."

A good idea. But such a regulation would not have helped Pamela Schoen, an Oregon grandmother who was killed while riding an ATV with her granddaughter and another girl last week. Reports from the scene suggest the 59-year-old woman was headed uphill when she attempted to turn the ATV around, only to have the heavy machine roll on top of her. Her two passengers, riding on the back, were thrown clear and received only minor injuries. Schoen wasn't so lucky and died at the scene.

At 59, she would have been excempt from the kind of measures the State of Florida is pursuing in an attempt to mitigate the death and injury toll. And safety programs, critics say, do not make up for the design inherent with most ATVs, regardless of manufacturer. Some are heavier than others. Some have handlebars, while others look like small pick-up trucks, or golf carts.

But they all have a narrow track and a high ground clearance. Thus, a high center of gravity that makes any ATV an accident waiting to happen, even with experienced adults. Federal regulators required manufacturers to discontinue the three-wheeled ATVs in favour of the four wheeled-version prevalent today, and while death rates initially dropped, things have not improved since.

That's due to the fact that over the nearly two decades that manufacturers stopped making the dangerous three-wheeled ATVs, consumers have embraced the four-wheeled models to the tune of 7.6 million. Accidents kill about 800 prople each year. An estimated 136,700 are injured, annually, on the machines. Since the US Consumer Products Safety Commission (CPSC) began keeping track of deaths and injuries since cracking down on ATVs in the 1980s 8,000 people have lost their lives while riding a four-wheeled ATV.

More than two million Americans have been seriosuly hurt.

Manufacturers have responded with safety warnings, safety labels, and recommendations to acquire operator training. Disclaimers abound, while regulators have been accused of looking the other way. At the end of the day, maufacturers are meeting their legal requirements while happily raking in the sales. Regulators appear either powerless, or reluctant to do anything about an allegedly unsafe product. The Florida statute is an effort by one State to make the best of a bad situaiton: if it can't outlaw ATVs altogether, it can at least attempt to lower the death toll and injury rates by requiring proper training.

As for the ATV manufacturers—among them Yamaha, Honda, Polaris, Kawasaki, Suzuki, Arctic Cat and Bombardier—they insist their products are safe and stable if opearted properly, and fault riders for accidents.

More ATV ROLLOVER News
However engineers with no bias to the machines, or the manufacturers, beg to differ. Last year the Oregonian newspaper, as part of a major investigative report on the machines, hired an independent engineer to guage the stability of four popular models. Thomas R. Fries, of Portland, measured the pitch stability using prescribed CPSC methods and found that the four units met the current, industry-adopted standard.

However, Fries revealed to the Oregonian that the government's test method overstated stability by 10, to as much as 15 percent. In an effort to achieve a more realistic result, the engineer performed a table test: ATVs were placed on a table and tilted sideways to discover their tip angle—the point at which their upper wheels lift off the surface. The tilt table method is a better measure, Fries believes, because it accounts for the way an ATV's suspension and tires behave.

On the tilt table test, all of the machines performed poorly, coming in below a stability threshold Fries considered safe.

And there are nearly eight million of them out there…