One of the few positives about the end of summer is a lessening in the number of ATV accidents that are reported. During summer months, and into the fall, ATV accidents occur on a daily basis. Some of the accidents are not fatal, but too many are. And still, despite the high number of ATV accidents, ATV makers do not seem to be at all interested in making their products safer or adequately warning ATV users about the risks. In fact, many manufacturers only make their products safer when they are forced to, either by law or by lawsuits. 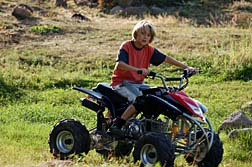 ATV manufacturers have a responsibility to design products that are safe to use. They should also consider the wide variety of conditions in which an ATV could potentially be used and design products that are safe for all those uses. However, what seems to happen is that ATVs are actually designed for a limited number of uses, and circumstances, and the driver is at fault if he or she does not follow those uses exclusively.

Consider the name All Terrain Vehicle. Most people would assume that a vehicle called an All Terrain Vehicle would be able to move on all terrains, including steep inclines (which are sometimes shown on ATV marketing materials). They do not realize that many ATVs are designed only for use on a flat surface or one with a mild incline. Unfortunately, they ride their ATV on an incline that is too steep for the vehicle and find themselves in a rollover situation, often with tragic results.

Another problem is with the warnings given for ATVs—many are too general. Consider Yamaha's September 11, 2006 warning letter regarding its Rhino:

"As with any off-road capable vehicle, there is a risk of tip over or rollover under certain conditions. Uneven terrain or slopes which pitch the vehicle sideways, turning too fast or sharp, or a combination of conditions increase the risk of tip over."

Note that the letter does not say specifically what type of uneven terrain or what degree of slope is likely to result in a rollover accident. Uneven terrain can mean a variety of things: from tiny potholes to gigantic mounds of dirt to mountainsides. Similarly, there are varying degrees of slope steepness, not all will result in a rollover accident. But, it is left up to the rider to decide what slope is too steep; the rider usually finds this out after the ATV rolls over.

Sure, the ATV makers have put warning labels on their ATVs and sent out warning letters to consumers, but those warnings are no good if they do not specifically set out what conditions make their vehicles dangerous. Otherwise, all they do is protect ATV manufacturers from liability. If they have created a vehicle that can rollover on a flat surface when being driven at five miles per hour, shouldn't they be held liable? After all, no ATV driver could predict a five mile per hour, flat surface rollover.

If you or someone you love has been harmed in an ATV rollover accident, you can take action to hold the ATV manufacturer responsible. Contact a lawyer to discuss your options.

If you have suffered losses in this case, please send your complaint to a lawyer who will review your possible [ATV Accident Lawsuit] at no cost or obligation.
Request Legal Help Now