ATV: Despite Accidents in the News, Rollovers Continue

It could be that ATV drivers think an accident will not happen to them. Unfortunately, what those drivers do not know is that, in some cases, it does not matter how careful or experienced a driver they are—the ATV is going to flip over no matter what. 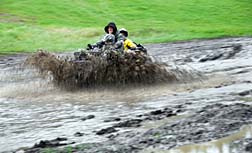 Why? Because some ATVs are designed in a manner that makes them top heavy. This throws off their center of gravity and makes them prone to a rollover, even when driven at low speeds on flat terrain. It's a complaint that we hear at LawyersandSettlments all too frequently: An ATV has flipped over too easily, leaving someone seriously injured or even dead. Those who survive their injuries are left wondering how the accident could have happened, how their ATV could have rolled over when they were driving so carefully and not taking any risks on the vehicle.

On August 24, 2008, a three year old boy died when the ATV he was riding in, a Yamaha Rhino, flipped over. The Yamaha was being operated by the boy's father, when it rolled over, pinning the young victim. The boy's father suffered a broken leg, but the emotional toll the accident will likely take is much, much worse. That is what many people who have lost loved ones in ATV rollover accidents say—the devastation of losing a loved one is something they never get over.

In another ATV accident, an eight-year-old boy was killed when the ATV he was riding in rolled over. Also involved in the accident were a 12-year-old and an adult. According to reports, the ATV was turned sharply to the left when it rolled over. The passengers in the front seat of the ATV were ejected, while the eight-year-old was pinned underneath.

While many people blame themselves for their accident, they do not realize that there is nothing they could have done to prevent it. With ATVs so prone to rollover accidents, there is no way to absolutely ensure that the ATV will not flip over when it is being driven.

More ATV ROLLOVER News
Any motorized vehicle accident has the potential to be deadly, but what makes ATV rollovers particularly tragic is that the vehicles' design makes an accident a strong possibility rather than simply a chance occurrence. If you need further proof, simply search Google News for ATV accidents and see the long list of recent ATV accidents.

Of course, if you do so, you'll also see the severity of injuries associated with ATV rollover accidents. Even when the accidents are not fatal, they are almost always serious, resulting in traumatic brain injuries, neck and spine injuries and even internal injuries.

If you lost someone due to an ATV rollover accident, it is important to remember that the accident probably was not your fault. It is possible that the accident was caused by the defective design of an ATV, and if that is the case, it is important to hold the ATV's manufacturer responsible. That may be the only way to ensure that more ATV accidents do not occur in the future.