Whistleblower: "They took away my license"

You'd think that following your employer's rules would be the right thing to do. Bill Li found out otherwise. Li (not his real name pending possible legal action) had worked since 2002 as a software engineer for a major defense contractor in the Washington, DC area. Until he became a whistleblower.

In his work as a security architect on projects for the US government's Defense Systems Information Agency (DISA), he held a security clearance for handling classified materials.

Li says, "If you have a security clearance, you have to follow more than a dozen different rules. If you see something is not right, it is your responsibility to report it." According to the company's own security manual, any "loss, compromise, or suspected compromise of classified information" must be reported either internally or to an agency such as the FBI. 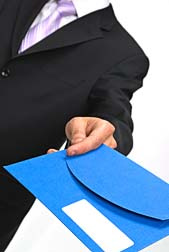 In May 2006, Li observed another employee mishandling classified documents: "You're not supposed to take classified material out of a classified environment You can do it, but it has to be properly wrapped. She just put it in a shopping bag and took it to a company building and worked on it all night.
Li reported the incident in December 2006. "I had been involved in an internal contract dispute since August and was preoccupied with that. It was at the back of my mind, but I wasn't sure if I should report it. When I read the policy in December, I reported the violation to the company."

Li says, "They told me that because you can't identify the violator, we can't pursue this. I knew the person, but not her name. We worked in the same office, the same building, but I never knew her name. I offered to identify her in person, but their response was simply not to investigate at all.

Li then forwarded the e-mail messages about the incident to DISA. When DISA made inquiries to the company, Li says, "My manager came to me and said, 'Okay, don't talk to anybody outside the company about this. Talk to the internal ethics committee.'

More News
"I said okay. That was in the morning. In the afternoon, I went to his office. I was very fed up and I told him that I didn't care if I lost my job—the e-mail exchange was very incriminating; they were violating the law.

"The next day I was laid off. I was told that it was because I had lost my security clearance in August, even though I had switched to a different division in the company and had been doing unclassified work since then.

Li lost his job in February 2007 and has only recently found employment. "Not having a security clearance has been a burden to me in seeking employment. Losing clearance is a serious matter. In the DC area, 80 percent of the jobs in my profession, especially senior positions, need a security clearance. They took away my license.
"I have a daughter going to college and one in high school, and I have a house here. I can't leave."