A veteran steamfitter for the New York City Department of Education (DOE) is now sweeping floors in a warehouse. He says that's because he has long been a whistleblower over asbestos contamination in the city's public school buildings.

Asbestos is a dangerous carcinogen; inhaled asbestos fiber has been linked directly to mesothelioma and to asbestosis, a potentially fatal scarring of the lungs that also causes increased susceptibility to lung cancer. Once used widely in thermal insulation, fireproofing, and other building materials, asbestos was banned in 1978. "Friable" asbestos that can be crumbled by hand is the most dangerous form; when found, it must be carefully removed by trained specialists.

John K. has been employed by DOE for 22 years; for the past 15 years he has been especially concerned about finding friable asbestos is school buildings—and outspoken when DOE has not taken action to remove it safely. He says that he has found asbestos in eight different school buildings, but that it has only been removed in one case. 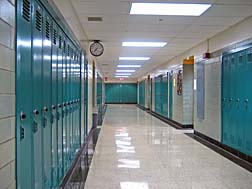 Frustrated by DOE's inaction, in late 2006 John and his attorney had samples from the eight sites analyzed by an independent laboratory at their own expense. Every one came back positive for friable asbestos. Despite this clear evidence, DOE denied that occupants of these buildings—including schoolchildren—were at risk for asbestos exposure.

More News
John says that he has long been the target of harassment and retaliation for his whistleblower activities. This includes a costly 30-day suspension in August 2007, and more recently his demotion. His disciplinary letter accused him of spreading negative publicity about DOE and, ominously, asserted that his actions were "substantial cause for dismissal".

John says, "I think they're trying to fire me to serve as an example to other employees not to speak up, but the schools are loaded with asbestos." He himself may be the best evidence; a health study of school custodial and other workers has indicated that John shows early symptoms of asbestos exposure.

John's case is currently the subject of a US Labor Department complaint. His attorney adds, "No one wants to file a lawsuit, but if this kind of harassment continues and if they try to terminate him, it's not out of the question."