"Snus", a Swedish type of smokeless tobacco, appears to be Big Tobacco's latest effort to recruit young Americans into a life of addiction and health risks.

As no-smoking laws sweep the nation and cigarette sales continue to drop, "smokeless" tobacco products are the industry's only "growth" product. But health officials are worried about a different type of growth: oral cancer, which has been linked to snus use.

In the United States, [oral cancer] is diagnosed in approximately 30,000 patients each year and is responsible for about 8,000 deaths. 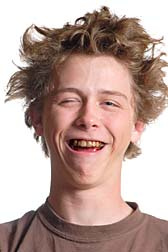 Big Tobacco's Marketing Ploy
Snus are being marketed as a convenient way to catch a nicotine high, without blowing smoke. And -- pack away the spittoons -- unlike most smokeless tobacco, snus don't create any residue. There's no spitting. Snus (for example, the Taboka brand) comes in teabag-like pouches that a user sticks between the upper lip and gums, leaving it there for up to 30 minutes.

"This is a growth strategy for us," says Bill Phelps, spokesman for Philip Morris USA, the nation's biggest tobacco company. In fact, Philip Morris has just launched its first smokeless product with a cigarette brand name: Marlboro Snus.

It's a brilliant marketing strategy - but it may also be a deadly one. Oral use of tobacco products has been associated with mouth cancer and other cancers. Many smokeless tobacco products do not fall under the strict marketing regulations that apply to cigarettes.

A bill that would give the FDA increased regulatory authority recently passed a U.S. Senate panel and is now gaining co-sponsors in the U.S. House.

Sales on the Rise, Children at Risk?
Unfortunately, the marketing ploy has been working. Sales of snus and related products in the USA have more than doubled in the last decade, according to a Federal Trade Commission report. Not surprisingly, tobacco companies' spending on promoting such products rose more than five-fold.

The sales growth of snus will "increase the number of people who use tobacco," says Matthew Myers, president of the Campaign for Tobacco-Free Kids. "It's market protection. This way, the big companies win no matter what tobacco products people use."

Sarah F., a retired school nurse and health advocate states, "I find it alarming because kids can use this product in schools, practically right under their teachers' noses, and they are usually unaware of the health risks."

Snus containers carry warning labels that say the product is either "not a safe alternative to cigarettes," "may cause mouth cancer" or "may cause gum disease and tooth loss." But public awareness about the risks is low in comparison to the public's understanding of the link between cigarettes and cancer.

That's good news for Big Tobacco. But it could be bad news for American parents and children. As Gregory Connolly, director of tobacco control research at Harvard School of Public Health stated: "This could turn out to be a public health disaster."

"All forms of tobacco are bad," he said. "It's like setting up a methadone program next to a drug house and keeping your fingers crossed and hoping it all works out."

Posted by
Atew
on May 27, 2013
This is lies. There are no links between true, steamed, gentle, sweedish snus and mouth cancer.

It is all USA, from their poisons.