A new study shows that women who are obese before pregnancy face a higher risk of having babies with birth defects than women with a healthy weight. 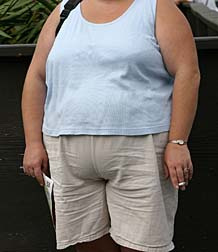 "The findings suggest that about 4 percent of women who are obese before pregnancy will have babies with major birth defects, versus 3 percent for healthy-weight women.

Spina Bifida Risk
The University of Texas study found that obese women faced double the risk of having babies with spina bifida and other neural tube defects (NTDs), than did women of healthy weight.

Neural tube defects are extremely dangerous, affecting the central nervous system, which includes the spinal cord and brain. Spina bifida and other NTDs generally develop 18 to 30 days after conception. Neural tube defects occur in approximately 1 in every 1,000 to 2,000 live births in the United States, or in about 1,500 to 2,000 babies each year.

Spina bifida, the most common disabling birth defect in the United States, occurs when the spinal column fails to close properly. That often leads to leg paralysis, learning difficulties and other serious problems.

While NTDs can be detected with prenatal screening, many physicians do not prescribe prenatal screening. Other factors that can contribute to spina bifida include maternal insulin-dependent diabetes mellitus, and maternal hyperthermia, the exposure to high temperatures.

Other Birth Defects Linked to Obesity
The study identified other birth defects associated with maternal obesity, including:

Findings "Under Recognized"
Dr. Alan Peaceman, a high-risk pregnancy specialist and professor at Northwestern University, stressed the importance of the findings to physicians. "This is probably an under-recognized finding which I suspect will be corroborated by other research in the future and something we will need to talk to our patients about," he said.

Dr. Michael Katz, acting medical director for the March of Dimes, said, "It's important because if it is true, it suggests that rising obesity rates might trigger significant increases in birth defects nationally".

Links to Diabetes, Diet Pills Explored
While reasons for the potential link between obesity and birth defects are unclear, Dr. Waller noted, it is possible that some women had undiagnosed diabetes, which also is linked to birth defects.

The researchers also said that it is possible that some women tried potentially dangerous weight-loss techniques right before conception or during early pregnancy, when most birth defects occur. Further research into weight loss and gain prior to and during pregnancy is warranted.

University of Texas researcher Kim Waller, the study's lead author, expressed concern about diet pills, urging obese pregnant women not to try diet pills, fasting or other aggressive dieting methods prior to conception or during pregnancy.

The study is published in the August edition of Archives of Pediatrics & Adolescent Medicine and was funded by the federal Centers for Disease Control and Prevention. The research is part of the National Birth Defects Prevention Study.