One Woman's Rough Patch with The Patch 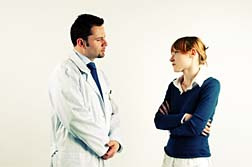 Ortho Evra was originally designed, and approved as an alternative to oral, and mechanical contraception. Women who had trouble remembering to take an oral contraceptive at the same time every day, or had adverse reactions to the Pill, were thought to fare better with the Ortho Evra Patch. A series of three patches need only be applied once per week, for three 7-day cycles. Apply it, and forget it. The fourth week there would be no patch worn, as the normal menstrual cycle would take its course.

The lower estrogen levels claimed with the Ortho Evra patch, suggested a safer alternative than the Pill, and greater convenience with fewer side effects. Little wonder the Ortho Evra birth control patch was embraced.

But not for long. Women started getting sick, and many died from blood clots—symptomatic of estrogen levels that are too high. It would be later learned that estrogen levels released by the Ortho Evra patch were higher than its oral counterpart, with a greater risk for serious side effects, including the potential for lethal blood clots.

One woman living in California tells of a remarkable 24-hour period after adopting the Ortho Evra patch as the best contraceptive choice for her. It was soon after the Ortho Evra birth control system had burst onto the market with much fanfare, and the medical community was abuzz.

'Nadine' was on the Pill, but not having too much luck with it from the context of adverse reactions, when she went to her doctor and was prescribed the then-new Ortho Evra patch in 2004.

Upon applying the product on a Sunday, she noted a slight burning sensation, followed by fits of sleepiness. She napped for most of that first day, a Sunday.

The following day, enroute to her job, Nadine was overcome with fits of nausea. She would spend much of that day in the washroom at work, throwing up. She had never had this kind of difficulty with the Pill.

The nausea fits were happening every 20 minutes. When Nadine had completely emptied the contents of her stomach and was bringing up little more than bile, she was sent home with breasts that were also beginning to feel quite tender.

Driving home, she could not control her nausea. On the California freeways, with no opportunity to pull over, she had no choice but to puke down her front and into her own lap as she drove. She was driving her boyfriend's car too, but luckily the car was spared. He clothes, and her dignity, were not.

She's glad she baled on the patch when she did…

Her doctor later told her that she might have been better to stick with the patch, and the nausea would have worn off eventually. Almost 5 years later, looking back, Nadine is glad she was so sick on the Ortho Evra patch that she baled when she did.

The Ortho Evra patch has had a rocky road since. Product labels have been updated by the manufacturer, Johnson & Johnson and subsidiary Ortho McNeil, with approval by the US Food and Drug Administration three times—in 2005, 2006 and again in 2008. The product now refers to the potentiality that Ortho Evra users would be exposed to about 60 percent more estrogen with Ortho Evra than if using a typical birth control pill containing 35 micrograms of estrogen.

Thousands of complaints have been issued and are in various stages of litigation, pertaining to the various side effects—among them deep-vein thrombosis, or blood clots in the legs and pulmonary embolisms, which are blood clots in the lungs. Some complaints blamed the Ortho Evra patch for heart attacks or strokes. Some 562 complaints reviewed by Bloomberg News blamed Ortho Evra for the deaths of 20 women. And those were only the complaints analyzed. There are many more.

More ORTHO EVRA PATCH News
Once the darling of the contraception world, the Ortho Evra patch has seen a sharp decline in sales, given the awareness of the risks through the various label changes, and the media coverage of those risks. Johnson & Johnson has so far spent nearly $69 million dollars settling lawsuits, and many more are in the pipeline. And yet the manufacturer has shown no sign of withdrawing, or recalling the product from the market, something that Public Citizen, the consumer advocacy group, has demanded.

It leaves one to speculate that either the benefits are still thought to outweigh the risks, which is hard to fathom—or the company is still earning more from sales of Ortho Evra, than settlements are costing them. Thus, economics dictate, more than moral obligation that a potentially harmful product remains on the market. Warning labels have changed, but the product has not. There is still more estrogen absorbed through the skin, thus the increased risk of blood clots, which can be fatal. It can be presumed, therefore, that even as sales have diminished, the Ortho Evra birth control patch is still out there, and more woman will die.