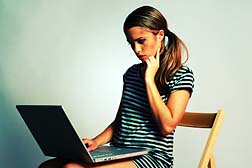 The attorney, who was identified by ABC News as Karin because she asked that her last name not be published, started a blog in April called STL Meal Deals where she wrote about local restaurant promotions. She was laid off by a New York City law firm after her first six months on the job.

Karin reportedly signed up for Google AdSense, a service that allows bloggers to host online advertising on their site. According to the program, once a blogger earns $100 from the ads, Google sends a check. It allegedly took Karin three months to get her first check.

According to current New York employment law, people receiving unemployment benefits who work one day and earn less than $405 in a single week will become ineligible for any payments for that week.

Karin is currently waiting on the Department of Labor to provide clarity on whether or not Google could be legally considered her employer. She has reportedly taken down the AdSense ads from her blog.