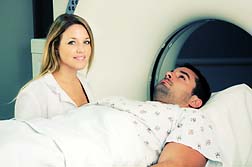 The class action lawsuit cites a 2007 study published in the New England Journal of Medicine that suggested overuse of CT scans could potentially increase the incidence of cancer. According to lawyers involved with the class action, the amount of radiation during a single CT scan can range from 1000 to 10,000 millirems.

The levels of radiation can be dependent upon the individual machine and the machine's particular settings.

In comparison, survivors of the bombings of Hiroshima and Nagasaki who were a mile or two from Ground Zero took about 3000 millirems, on average of radiation.

Trevor Rees is one of the 206 Cedars Sinai patients who claims to have received excessive radiation and is part of the class-action lawsuit. In the November 8th issue of Oncology Business Week Rees describes a call allegedly made to him by a doctor inquiring if Rees had experienced any hair loss.

Rees only learned of the potential overdose of radiation from television news reports. The patient underwent two CT scans for a stroke in December of last year.

Rees says, "I certainly don't relish the chance of dying of tumors. I'm supposed to live stress free and this hasn't helped matters."

The class action suit, for which Rees is serving as lead plaintiff, is suing for medical malpractice, strict product liability, negligence, breach of express warranty and breach of implied warranty.

More NEGLIGENCE News
The action includes all individuals who received a CT brain perfusion scan at Cedars Sinai Medical Center from February 2008 through August of this year. It also includes anyone who received such a scan that utilized CT image machines manufactured by GE Healthcare Inc. and GE Healthcare Technologies at any medical facility during the two-year period preceding this suit.

There has been much concern of late with regard to the frequency of CT and MRI scans for patients due to increased availability.

Los Angeles trial lawyer Bill Newkirk suggests the issue is not just a Cedars Sinai problem. "We believe that because of the way the machine is manufactured and explained to medical users, there is a very good chance that this same situation has been or is being played out in radiology departments across the country. We have no idea how many people have been overdosed with radiation."

Click to learn more about LawyersandSettlements.com
LawyersandSettlements.com - A trusted, independent legal news provider bringing quality news and information on legal cases and lawsuits filed in the United States of America to its readers since 2002. Over 650,000 legal help requests including Malpractice Cases, and Personal Injury Cases have been forwarded to lawyers all across to the country.