Increased Risks for Motorcyclists: Are Auto Drivers to Blame?

Since 1997, motorcycle rider fatalities have increased by 89 percent. And although motorcyclists are often stereotyped as reckless and fast drivers, it is most often negligent automobile drivers that are the cause of motorcycle accidents.

Deadly Accidents on the Rise
Recent data from the National Highway Traffic Safety Administration reports a startling increase in motorcycle accidents over the last several years. The government report, entitled Recent Trends in Fatal Motorcycle Crashes - 2006 Update states that more than 4,000 motorcyclists are killed in the United States each year, up from 2,116 just a decade ago. 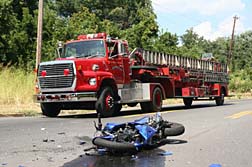 The government's analysis is based on 1995-2004 data from the Fatality Analysis Reporting System (FARS) along with data from Motorcycle Industry Council (MIC), Federal Highway Administration (FHWA), and the United States Census Bureau.

Are Automobile Drivers to Blame?
According to another study entitled Motorcycle Accident Cause Factors and Identification of Countermeasures (commonly known as "The Hurt Report") the majority of motorcycle accidents are intersection crashes, and often involved traffic violations by the other driver. Failure to see the motorcycle or seeing the motorcyclist too late to avoid the collision are the most common accident scenarios.

Motorcyclist advocates argue that many states do not have enough motorcycle-awareness training in driver's education, and that many motorcycle fatalities are preventable with proper safety awareness for automobile drivers. They also call for more motorcycle-related questions on state driver's license tests.

Jim, who has been riding for more than 20 years, agrees that better training is needed. "A friend of mine lost his leg because a car turned left and didn't see him. I've had so many close calls that I am just hyper-aware [when I ride], especially on divided highways."

Motorcyclists Take Action
A grassroots organization entitled Motorcyclists Against Dumb Drivers offers tips online for motorcyclists concerned about their safety. The group advises riders on how to actively scan for potential hazards at all times. The most critical area to scan, according to the association, is the distance it takes a rider's cycle to travel in 14 seconds.

It also recommends that riders pay particular attention to cars stopped at intersections on side streets who may pull out, and cars approaching from the opposite direction which may turn left in front of the motorcycle.

The group has spearheaded a program called Educate Your Governor, urging riders to write to their state governments to lobby for improved automobile driver training on motorcycle accident avoidance strategies.

Motorcyclists Against Dumb Drivers encourages defensive driving and extra caution among motorcyclists, because, in their view: "You are going to have to ride smart until auto drivers get smart."

"Unfortunately, I think they're right!" laughs Jim, who lives and rides in Simi Valley, California.

Tips for Auto Drivers
Since the majority of accidents appear to be caused by automobile drivers, more and more states are taking action to educate automobile drivers on effectively preventing accidents with motorcycles. For example, the State of Nevada Department of Motor Vehicles offers these tips in an information package for auto drivers:

If You Have an Accident
Motorcycle accidents can cause lasting physical pain and involve long periods of physical therapy and recovery. Often in the case of seemingly "minor" accidents, motorcyclists may not report the accident promptly or seek necessary medical attention.

If you have an accident -- even if you are simply "run off the road" -- be sure to document the accident, seek medical care immediately, and notify your insurance carrier. You may have injuries that only a physician can detect.

It is always wise to seek the advice of a lawyer if you believe you may have claims against the other driver.

If you have been involved in a motorcycle accident you may contact a [Motorcycle Accident Lawyer] who will review your case with no cost or obligation.
Request Legal Help Now