Two Off-Duty Cops Killed on Motorcycles After Being Cut Off

On Monday an off-duty police officer died while riding a motorcycle. His wife, who works in the communications division of the Conroe Police Force, took the call… 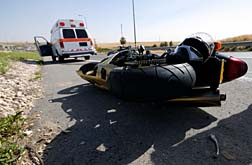 The headlines go on and on, and sometimes you can never know if it was speed, or some other factor that caused the crash. Responsible motorcyclists wear helmets and almost always a helmet that is approved for that purpose. And still, riders are injured and die—there is no protection like you have in a car, and there's little between you and the pavement speeding by at 60 MPH beneath you. Or that car barreling up behind you, or the car that is about to cut you off…

It is true that other drivers who fail to see a motorcycle—or worse, refuse to see them cause many motorcycle crashes. There is this misconception that a motorcycle, smaller and more maneuverable than a car, is wily and can stop on a dime.

That makes it okay to turn into one, or cut one off?

It is also a known fact that some car drivers just have it in for motorcyclists. They see them as irresponsible speed demons that don't belong on the road. True, there are a few who would benefit from a racetrack—but they're the bad apples and simply make it harder for responsible Americans who gravitate to motorcycles at mid-life, or for the economy of operation they offer.

Regardless of whether a car driver has it in for the motorcyclist, or just isn't paying attention, when a car and a motorcycle collides, the smaller vehicle always loses, and its rider loses most of all.

According to the Houston Chronicle, Gary Hardage was eastbound on Texas 105 in west Conroe at about 1:30am when the driver of a Jeep Cherokee pulled out from a parking lot and into the patrol sergeant's path.

Hardage was wearing a helmet and—as a police officer—rode responsibly. But there was no hope for him. He died at the scene.

What makes the accident all the more tragic is the fact that Hardage's wife Tammi works as a Conroe Police Communications supervisor, and it was Tammi who took the call regarding a fatal motorcycle crash. According to reports Mrs. Hardage was initially unaware that the call referred to her husband's motorcycle until a few minutes later, when they ran the license plate and determined the owner.

The driver of the Cherokee that hit him, a 19-year-old man, walked away with minor injurious.

More MOTORCYCLE ACCIDENT News
Sadly, Gary Hardage is the second off-duty officer from the same force to die on the seat of a motorcycle. And, like the Hardage case, the circumstances that lead up to the death of Feldon Joe Cranfill, were not of his doing. The 38-year-old officer died when the motorcycle on which he was riding struck a Ford truck that turned in front of him.

These are but two examples of the hundreds, if not thousands of stories involving motorbikes that have been struck, cut off or otherwise compromised by a larger motorized vehicle.

The savvy motorcyclist, injured and facing a mountain of medical bills will call a motorcycle injury lawyer and pursue damages. Accidents DO happen, it is true. But many times over those accidents happen because either the driver of a car is not paying attention, or worse—simply has it in for anyone on a motorbike.

And they should be made to pay for their indiscretion.