California Labor Law: More on Overtime for IT Workers 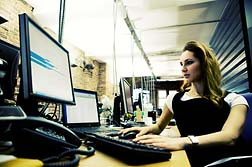 Still, California exempt computer professionals are required to work as many hours as their employers demand, and are unfortunately not entitled to overtime pay, or timely meal and break periods.

For a computer professional in California to be exempt, they must be paid a minimum salary under California Labor Code 515.5. New legislation was past in September 2008 which reduced the salary requirements for Computer/IT Professionals. This meant that a fixed salary could be paid regardless of the hours worked. However, this modification meant that a computer professional could still be entitled to overtime for past work based on certain salary parameters.

But many Computer Programmers and IT Professionals are misclassified as exempt from overtime when viewing compliance with California Labor Code 515.5, irrespective of the salary requirements.

If you are administratively exempt, it means that you exercise independent discretion
and need little supervision in your job 50 percent or more of the time. And you supervise other subordinates directly. For example, over 50 percent of the time you hire discipline, fire, set schedules and perform management duties like set policy, write checks and decide on expenditures. As well, employers often classify computer professionals as exempt when they are hired but don't make any changes to the classification if the employee's job duties change.

The California Court of Appeals recently decided in favor of the employer in Combs v. Skyriver Communications, Inc. (2/7/08). In relying upon the changes to the Industrial Welfare Commission's Wage Order No. 4-2001, it determined that Combs was an administrative exempt employee and, therefore, not entitled to overtime, meal periods or rest periods.

Combs had worked as "Manager of Capacity Planning" and "Director of Network Operations" at Skyriver, a "start-up" style wireless broadband Internet service provider. He was responsible for assuring that Skyriver's network was properly operating. Skyriver had classified Combs as exempt from overtime obligations, pursuant to the administrative exemption.

Combs resigned and filed an overtime lawsuit, along with various violations of the California Labor Code and unfair business practices by claiming his responsibilities could not be "administrative" because his duties primarily focused upon maintaining Skyriver's product, i.e., its network. He further claimed that his exempt status was controlled by two recent California Court of Appeals opinions which had rejected the administrative exemption for insurance adjusters and customer service representatives because their duties involved providing the product to customers, making them "production" workers rather than administrative workers.

On the other hand, Elaine in San Jose is likely misclassified. "I am an I/T employee who receives ZERO overtime because of being classified "exempt", she says. " I work as a "help desk specialist" for a grocery distributor and I am salaried at $81,000/year. I never work less than 50 hours a week and often work in excess of 60 hours per week. I have been on this job for three years and overtime has never been offered, considered, spoken about, and most definitely never paid." Elaine does not perform any managerial duties, nor does she supervise anyone.

If you believe you are misclassified, you should seek help from a California overtime pay attorney.

If you have suffered losses in this case, please send your complaint to a lawyer who will review your possible [California Labor Law Lawsuit] at no cost or obligation.
Request Legal Help Now