Ezetrol: America's Problems are Canada's Problems... and You're Paying for Them

Nowadays, Canada's neighbors include the likes of pharmaceutical giants Merck/Schering Plough; they also include the US federal Food and Drug Administration (FDA). Merck/Schering and its Canadian subsidiary Merck Frosst is the big pharma consortium that manufactures and sells Ezetrol (Zetia in the US market), the anti-cholesterol drug that is now under close scrutiny after ENHANCE test results released in January indicated that it is no better (and quite possibly worse) than cheaper generic statin drugs at reducing arterial plaque and thus users' risk of heart attack and stroke. The FDA is the federal agency that approved Zetia/Ezetrol in October 2002.

North of the border, Health Canada approved Ezetrol for sale a few months later in June 2003. Canadian doctors have been prescribing it, and Canadian patients taking it, since then on the assumption that because Ezetrol does reduce low-density cholesterol noticeably, it must also reduce the user's risk of heart attack and stroke. Now the ENHANCE test results indicate that while the first part of that equation is true, the second may well not be. 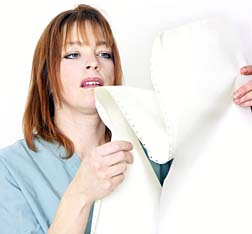 Zetia was approved in the US through a fast-track process called "surrogate markers". Surrogate markers allow a drug's proponent to use certain indicators, called endpoints, during their clinical trials that will substitute for other endpoints that might take longer to test. In the case of Zetia (and thus also Ezetrol), FDA allowed Merck/Schering to use cholesterol reduction as their testing endpoint rather than incidence of stroke and heart attack among the patients in the trials. It was quicker and cheaper, and allowed the company to get their product into the market sooner.

As we now know, that endpoint only told half the story, but it didn't keep Zetia out of the US market. And since Health Canada often works "in parallel" with FDA on drug approvals, it also didn't keep Ezetrol out of the Canadian market. Five years later, we finally know better.

This does not mean that Health Canada marches in strict lockstep with FDA on drug approval; in fact, Health Canada was more diligent than FDA about reporting and requiring warnings about Ezetrol's side effects such as muscle pain and deterioration, as well as hepatitis. On the other hand, Health Canada did approve Ezetrol based on the same data and standards that FDA used. And both the data and the standards were set by Merck/Schering, and not by an independent external agency.

In the aftermath of the Zetia/Ezetrol fiasco, what is to be done? Well, if the declining prescription numbers are any indicator, it looks like doctors and patients on both sides of the border are re-evaluating use of the drug and giving it 'a thumbs down'. Ezetrol isn't likely to go away, but it will almost certainly be prescribed far less frequently.

Apostles of unregulated "market forces" may claim that this proves how well the system works—the drug goes on the market, it gets prescribed, it's shown to be potentially useless, and people stop buying it. The only flaw in that logic is that some patients have almost certainly succumbed to heart disease needlessly from using Ezetrol. That's too high a price to pay for ideological purity.

Further—and Health Canada needs to pay attention here—the FDA, by all accounts, is a broken agency, critically underfunded and understaffed. Congressman Bart Stupak (D-MI) recently called for the resignation of FDA Commissioner Andrew von Eschenbach and other top officials, saying that if Americans "knew how little the FDA did to assure the food and drug supply, if the truth ever came out... people would be marching in the street."

That is hardly a ringing endorsement for an agency that plays a key role in the approval of drugs for Canadian users. God save us from our neighbors if Health Canada won't.

If you or a loved one has suffered a heart attack or stroke while taking Ezetrol or Zetia, please contact a lawyer involved in a possible [Ezetrol, Canada Lawsuit] to review your case at no cost or obligation.
Request Legal Help Now