The various nuances of employment law goes well beyond issues of unpaid overtime—and one of the most grievous aspects of an otherwise good employment environment gone wrong is when sexual harassment is involved. 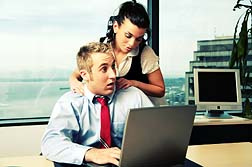 And like the movie with Michael Douglas and Demi Moore about workplace sexual harassment, it's not always the male harassing the female. Sometimes it's the other way 'round.

The alleged victim was eventually moved to another department within the resort and the situation de-escalated, but in a stunning turn of events the female supervisor was transferred into the sane department a few months later and the alleged harassment resumed.

According to the text of a lawsuit filed September 16th by the US Equal Employment Opportunity Commission (EEOC), the alleged victim again complained to his employer about the workplace harassment, but nothing was done and he eventually quit.

As reported in the September 18th edition of US Fed News, sexual harassment violates Title VII of the 1964 Civil Rights Act. The sexual harassment lawsuit, filed earlier this week in the US District Court of South Carolina, was served on Festiva Resort Services Inc.

More EMPLOYMENT LAW News
The charge is that the resort company, which is comprised of a vast array of resorts throughout the US and the Caribbean, took no action to curtail the alleged harassment of a male employee by a female supervisor that was conducted in an escalating pattern over a 14-month period.

It is alleged that the harassment occurred in front of other employees and managers within the company, causing the victim noticeable discomfort and embarrassment.

The EEOC lawsuit was filed after an attempt to reach a voluntary settlement failed. The agency is seeking, on behalf of the victim, compensatory and punitive damages together with injunctive relief designed to prevent such occurrences in future.

"This is an example of severe and pervasive acts of sexual harassment which no employee should be allowed to endure," said Robert Dawkins, regional attorney for the Atlanta District Office. "The EEOC is committed to taking action to eliminate this type of harassment in the workplace."

If you have suffered losses in this case, please send your complaint to a lawyer who will review your possible [Employee Rights Lawsuit] at no cost or obligation.
Request Legal Help Now