In a way, it's ironic that Kailen Gonzalez is studying to be a surgical technician. The native of Fort Lauderdale is hoping that a plastic surgeon can fix the scars from a dog bite injury after she needed 25 stitches to close wounds in her face. It is not known if Gonzalez would be seeking legal retribution for her injuries and to help pay for her medical bills, although people harmed in a dog attack would be well advised to contact a dog bite lawyer in order to achieve full benefit from dog bite law. 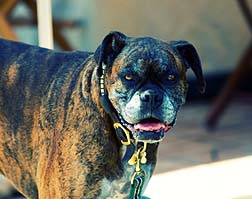 According to a June 2nd, 2009 report in the South Florida Sun Sentinel, two pit bulls were euthanized yesterday as a consequence of the May 20th attack on Gonzalez and a dog that was in her care at the time.

While details of the attack are somewhat vague, the Sun Sentinel reported June 2nd that Gonzalez—a self-confessed animal lover—was dog sitting when the attack occurred in Fort Lauderdale's Victoria Park neighborhood. A male pit bull named Bobby and a female pit bull dubbed Shelbi are alleged to have turned on Gonzalez and the Silky terrier in her care.

The terrier was killed in the attack, and Gonzales received a dog bite injury to the face that required 25 stitches to close.

"I'm an animal lover, so I will never, ever say that I'm happy for this to be happening," Kailen Gonzalez told the Sun Sentinel, in comments published yesterday. "But in this situation, this was the best and most responsible thing to have done to these animals."

That was to put them down. Following an investigation by the Animal Care and Regulation Division of Broward County in Florida, officials ordered the two pit bulls euthanized in accordance with a year-old ordinance that allows for the County to put down a dog if it has been shown to commit a single, unprovoked attack that seriously injures an individual.

The owner of the now-euthanized pit bulls surrendered her dogs to the County as requested, but disputed Gonzalez's account of the events of May 20th. According to comments appearing in the June 2nd, 2009 edition of the Sun Sentinel, Katarzyna Zalewski claims that one of the dogs that was with Gonzalez had hurt [Zalewski] and the pit bulls were provoked to attack on [Zalewski's] property.

"They never attacked before," Zalewski told the Sun Sentinel.

Meanwhile, during National Dog Bite Prevention Week last month Southern California Edison (SCE) capitalized on the occasion to remind its customers to be responsible pet owners by helping to protect meter readers and other field-based customer service employees from dog bites. As reported in the June 6th 2009 edition of Pediatrics Week, about 2,500 meter readers and other customer service reps are made to deal with unsecured dogs—many of them frightened or angry at the appearance of a stranger coming within close proximity to their environment.

More DOG BITE News
Dogs are extremely territorial. As reported in Pediatrics Week June 6th, nine SCE employees had been bitten by dogs while performing their duties in Southern California so far this year (to mid-May). In 2008, a total of 37 SCE employees were injured in dog bite attacks.

The Centers for Disease Control and Prevention (CDC) in Atlanta estimates that there are more than 4.5 million individuals bitten by dogs nationwide each year. Sadly, the most frequent victims are small children and the elderly.

A dog bite injury is not only physically painful, it can be particularly traumatic emotionally—and especially for children. Such an event could have lasting psychological effects. Little wonder that a dog bite lawyer is often called in to apply dog bite law, when an unprovoked attack by a dog results in physical and emotional harm.

If you have suffered losses in this case, please send your complaint to a lawyer who will review your possible [Dog Bite Lawsuit] at no cost or obligation.
Request Legal Help Now