Dog Owners Can Be Responsible for Dog Bite Injury

When children or innocent bystanders are hurt by a dog bite injury, much focus is put on the dog itself. After all, a dog bite personal injury is caused by the dog and destroying the dog prevents it from harming another human. The problem, however, is that dog owners often treat their dogs in inhumane ways, which lead to dog bite injuries and dog bite lawsuits. Some states, including California, have taken action against owners that treat their dogs poorly. 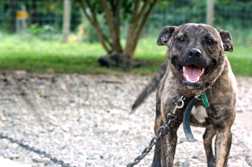 In 2007, California signed an act designed to protect dogs from inhumane treatment while at the same time recognizing that this treatment can result in vicious and aggressive dogs. The laws states that dog owners who leave their dogs chained up for more than three hours can face fines of up to $1,000 and six months in jail.

The law prevents tethering a dog to a stationary object for more than three hours in a 24-hour period. This law does not prohibit dogs that are attached to running lines (such as when a dog is hooked to a clothesline that runs across the yard, allowing the dog the ability to get exercise) unless the running line uses a choke or pinch collar. The law allows dogs tethered to fixed objects when they are at campgrounds or other areas that require dogs be restrained.

According to Unchain Your Dog (unchainyourdog.org), California was the first state to put a time limit on how long dogs could be tethered to a stationary object. People in support of the law said it protected the well-being of dogs, who can become isolated and more aggressive when they are chained up. Critics of the law say that people who take good care of their pets could be criminalized.

More DOG BITE INJURY News
Chaining or tethering a dog refers to a practice in which the animal is tied to a stationary object, such as a tree or doghouse, to keep the dog under control. It is viewed as not only inhumane but also as a threat to the safety of other animals and humans. A dog that is chained to a stationary object tends to become isolated and suffer psychological damage, according to Unchain Your Dog. Furthermore, because the dog's movement is restricted, the dog cannot hide when faced with a threatening situation, so the only course of action is to become aggressive. This can lead to serious dog bite injuries if a child or other person comes into contact with the animal.

According to the Journal of the American Veterinary Medical Association (as reported by Unchain Your Dog), 17 percent of dogs involved in fatal attacks on humans between 1979 and 1998 were restrained on their owners' property when the attack took place. Even when a tethered dog is released from the chain, the dog can maintain an aggressive posture and attack other animals and people.

If you or a loved one have suffered losses in this case, please click the link below and your complaint will be sent to a personal injury lawyer who may evaluate your Dog Bite Injury claim at no cost or obligation.
Request Legal Help Now