Copyright infringement is the new blue-collar crime, and the Internet is the new frontier for posting, displaying, downloading and using things that belong to someone else.

Copyright is a form of ownership, after all. Not unlike the way you own a car, or a piece of real estate. The bank may be on title so long as you hold a mortgage or a bank loan, but it's not like the staff from the lending institution gets to use your place on weekends. 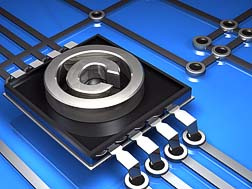 And when you own it, you OWN it. No one has the right to use your home, drive your car, or use your belongings without permission.

Here's the problem: the Internet makes it so easy.

There are thousands of violations of copyright on the Internet every day. No, millions. Perhaps billions, worldwide. Music or videos that are uploaded, downloaded, or posted on sites such as You Tube. Articles and stories that people have written and posted for their own purposes on their own sites are cut, pasted and pirated.

And photographs are too, thanks to digital photography.

Gee, here's a private web site with a collection of nifty wedding photos. Bob and Ariel's wedding. Great pictures. I guess they're here for the convenience of their friends and colleagues around the globe, who couldn't make it to the wedding.

Y' know, a couple of these would work really well to illustrate my company report…

And so it goes. Now, unbeknownst to Bob and Ariel, they have been pressed into service as unwitting spokespersons for XYZ Corporation. Or worse, Pretty Kitty Adult Toys and Novelties. More often than not, it's a wedding photographer using a particularly nice image to bolster his or her on-line portfolio.

You know what they say; once something is online, it's out there. And you ultimately have little control over how it is used.

That may be true. But is it right?

Intellectual property—be it music, the written word or images—is no different than owning a home, or a car. Somebody wants to use your cottage for the weekend will have to seek permission, and most likely provide you with a fee. They can't just sneak in when you're not there, just because they know where the key is hidden.

And if you find that something you have written, composed or produced is being used online by someone else, you have the right to demand the piracy be terminated immediately and a fee paid for use up to that point, and / or a fee paid for continued use.

You also have the right to sue, which is what Justin Humphreys, Casey Bagent and Molly Aguilar of West Virginia are doing to protect the images of themselves and their children, after a photographer allegedly posted their images on her web site without their permission.

While there are various issues at play in the litigation, the overriding accusation is that Sheri Grippo-Titus, a photographer who practiced in Jefferson County, posted 74 images of the three plaintiffs and their children on her web site without obtaining a model release from any of the individuals, which is considered to be standard practice.

"In the professional photography business it is usual and customary to obtain a signed form called a Model Release Form prior to the commercial use of a person's photograph," the suit says.

The images were posted without permission, or prior knowledge of the plaintiffs, who claim that they learned in April of this year that the images were being used in this way, and had been for a period of about 18 months.

More COPYRIGHT INFRINGEMENT News
The suit alleges that counsel for the plaintiffs sent correspondence to the defendant requesting that the photos be removed from the web site in an effort to protect the plaintiff's privacy. However, it has been reported that they were not removed.

There are outstanding issues between Grippo-Titus and Aguilar, who worked for Grippo-Titus at one time. Unpaid work and the non-return of an expensive camera that Grippo-Titus claims was stolen are being bandied about.

The motivation for posting the images on the web site notwithstanding, failure to obtain a standard release is, in the legal world, copyright infringement.

The plaintiffs allege a violation of their privacy. They are seeking $500,000 in compensatory damages and $1 million in punitive damages.

If you have suffered losses in this case, please send your complaint to a lawyer who will review your possible [Copyright Infringement Lawsuit] at no cost or obligation.
Request Legal Help Now