Ever since the first Model T came off the assembly line, the auto defect has been a part of automotive life for both manufacturer and consumer. For the latter a defective automobile is not only a frustration, it can also be injurious and defective auto lawsuits are commonplace. That won't change, as manufacturers must continue to be legally held accountable for the defective car. 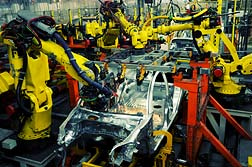 However, for plaintiffs with cases pending against Chrysler and General Motors the recent bankruptcy filings of those two automakers appears to leave litigants out in the cold, according to a report aired on ABC World News with Charles Gibson on June 3rd.

On the program, investigative journalist Brian Ross revealed that as part of the bankruptcy filings undertaken by the two massive automakers, accident victims suffering injuries from defective autos would be afforded the same rights as unsecured creditors once the two companies emerge from bankruptcy.

In other words, secured creditors will be first in line for payment of debts owed. However, unsecured creditors—including accident victims, it appears now—can expect no more than "a half penny on a dollar," Ross told ABC News anchor Charles Gibson on the June 3rd telecast," and more likely Charlie, zero."

A spokesperson for the US Treasury Department, who was not identified in the program, reportedly told ABC News the denial or reduction of compensation for accident victims is conventional bankruptcy practice and that the US Treasury was not involved in the decision. According to Ross, Chrysler has indicated it will take legal claims into account, but that there can be no special treatment for accident victims unless the bankruptcy court judge changes his ruling in the bankruptcy proceedings.

There is no question that an auto defect can have serious implications on the life and livelihood of an accident victim—and many of those victims gathered in Washington on Wednesday to protest the bankruptcy ruling and to express their outrage.

Among them was Jeremy Warriner, who painfully and with great effort was seen to rise from his chair and hobble to the lectern on two prosthetic legs. His two legs were burned off, according to the ABC News report, when an allegedly defective plastic brake fluid container on his Jeep Wrangler caught fire.

Hundreds of other victims of defective Chrysler products appear to be facing the same fate after learning of the Chrysler bankruptcy ruling this week. Auto defect victims of GM products, according to ABC News, fear the same thing will happen to them.

Among them are the parents of Amanda Dinnigan. The little girl, all of 10 years old, requires specialized care after an allegedly faulty seat belt in a GM Envoy snapped the child's spine during an accident. The cost for Amanda's care runs a half million dollars every year, according to ABC. The family was counting on their lawsuit against GM to pay for Amanda's care.

According to ABC News, Chrysler routinely spent about a quarter of a billion dollars each year to settle lawsuits brought against the manufacturer by plaintiffs and accident victims injured in defective Chrysler products. According to Ross, GM would have spent even more.

More DEFECTIVE AUTO News
And once the two companies emerge from bankruptcy and resume normal operations, it is expected that traditional liability protocols will resume. However, for plaintiffs making claims against the two companies alleging auto defect prior to the plunge into bankruptcy, the situation appears grim.

A bankruptcy attorney quoted on the program said that in his view the government appeared to be pushing things through to streamline the process to the point where individual rights could be minimalized.

"I think we have been robbed of justice," said Joy Wolf, the wife of an accident victim who granted an interview to ABC World News. "The bottom line as it stands now is that there is absolutely nothing for the innocent victims."

The situation poses a challenge for the legal representatives of these auto defect victims, injured or killed in an allegedly defective automobile. That said, lawyers will continue to strive for fair compensation for defective car victims, regardless of what the manufacturers—and the courts—throw at them.

If you have suffered losses in this case, please send your complaint to a lawyer who will review your possible [Defective Lawsuit] at no cost or obligation.
Request Legal Help Now