The W.R. Grace Trial: Did Mesothelioma Win, or Lose?

The relationship between mesothelioma and asbestos has been supported time and again, and there is no cure for mesothelioma cancer. That's why critics of the recent court decision involving the W.R. Grace Company remain aghast at the outcome. Even in the presence of evidence that pointed to asbestos as the cause of mesothelioma and cancer amongst a host of residents in Libby, Montana—a jury acquitted the company and three other defendants of all criminal charges in the 3-month trial that concluded earlier this month. 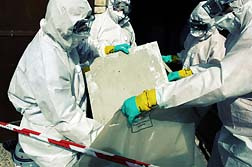 In a telephone news conference with his lawyers after the verdict was handed down, one of the defendants—retired W.R. Grace executive Jack Wolter—even suggested there was no question that residents living near the W.R. Grace mine in Libby, Montana had suffered. "Our heart goes out," he said to media in the conference call. "But this trial was about other things."

Indeed, a trial that had been hotly anticipated since the original 2005 indictment and followed closely for months during it's tenure had little to do with the asbestos contamination of nearby residents and everything to do with whether, or not W.R. Grace conspired to hide evidence and cover up the crime.

In the end, after two days of deliberations the jury decided that the asbestos contamination that sickened hundreds of people in Libby and contributed to the deaths of 200 more in a town barely 2,600 strong was not a criminal act.

On the surface, it may appear that the anti-asbestos lobby lost this one. However, in reality the government case attempting to prove that the now closed Zonolite mine and its executives knew about the evils of asbestos and attempted to cover it up, failed.

Various problems with the government case, including timelines and a judicial ruling with regard to one of its witnesses, contributed to the loss for the government side and the complete acquittal on criminal charges.

However, there is little doubt that the activities of the W.R. Grace mine in Libby contributed to the mesothelioma cancer deaths, or illnesses of a large cross section of the small town in picturesque Montana.

Vermiculite, which naturally contains asbestos, has been mined in Libby since 1923—a year that predates W.R. Grace by decades.

However, there is plenty of evidence to suggest that the company eventually came to realize that the vermiculite undertaking and their activities to mine the asbestos-laced product was making people sick.

Robert Locke, a former W.R. Grace executive, testified that he and his fellow executives knew asbestos was sickening people with asbestos-related illnesses and were actively working to hide that knowledge.

A problem relating to a discrepancy with the frequency by which Locke had met with prosecutors caused the presiding judge to order the jury to discount much of Locke's testimony.

However Locke's testimony with regard to the company's awareness that asbestos was making people sick, is telling.

The trial hinged on a series of internal memos, some dating back to the 1970s', that allegedly showed executives talked about the costs of people dying in Libby of asbestos-related disease. Many of those deaths would have been linked to mesothelioma.

The trial judge refused to allow the jury to see that evidence. Thus, there were numerous reasons supporting the acquittal on criminal charges.

More ASBESTOS News
However no one is arguing over the perils of asbestos. There is ample proof of at least 200 deaths in the small Montana town of asbestos-related diseases. Hundreds of people in the small town of 2,600 became ill.

There is also no dispute as to the source of that asbestos: The Zonolite Mountain vermiculite mine, owned and operated by W.R. Grace from 1963 to 1990.

In the end, the trial concluded that W.R. Grace did not knowingly conspire to hide evidence, and therefore was not criminally responsible. However, there was no attempt to disprove the lethal tendencies of asbestos and the fiber's links to mesothelioma and cancer. Mesothelioma is an incurable disease that has no other link thus far than to asbestos exposure. Mesothelioma cancer is a horrible way to die. Regardless of who may have been criminally responsible in Libby—if anyone—some 200 innocent people in a small Montana town have died.

If you have suffered losses in this case, please send your complaint to a lawyer who will review your possible [Asbestos Lawsuit] at no cost or obligation.
Request Legal Help Now