It just keeps happening, like a runaway train. Asbestos cancer, and diagnoses of asbestos mesothelioma from asbestos exposure appears to be a daily occurrence, with no sign or letting up. People are getting sick, and people are dying from asbestos involvement that happened so long ago… 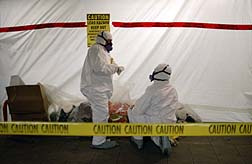 If there is any good news at all, it is that for the most part asbestos is finally getting the respect it has deserved for so long. The vilified product is no longer used to insulate buildings or serve as an ingredient for wallboard. Were a building, such as an older home or a school, be discovered with asbestos lurking therein, one could be forgiven for assuming some kind of outbreak is suspected. Workers don masks and sealed protective suits in an effort to mitigate exposure as they investigate the state of the asbestos, and whether or not it can be safely removed. If it can, the removal is a highly choreographed and rigidly co-ordinated process that is designed to protect both worker, and ultimately the occupants from further exposure.

But it wasn't always like that. While the evils of asbestos have been known since the turn of the century (the LAST one—1900), the recent environmental movement has helped to foster a precautionary tone not previously seen with asbestos for decades.

In other words, it was always around. But few ever did anything about it. Besides, those who ran the factories and did the installations of anything that had anything to do with asbestos were not getting sick. If workers were suddenly to begin gasping for air when they're around the stuff, such a tip-off might prompt management to act. But few, if any got sick on the shop floor.

We now know, of course, that those people are getting sick not on the shop floor, but at home. And that sickness—asbestos mesothelioma—can take decades to surface, often long after the worker retires from the job.

That's what happened with Donald Doberstein. He was diagnosed with the horrific disease in July, and lost no time filing a lawsuit in Madison County Circuit Court the day before Halloween.

The now-ill Doberstein claims that he worked as a laborer starting in 1952 at the American Can plant. A year later he moved over to the Cutler Hammer Plant, before moving in 1954 to Allen Bradley—a job he would hold for 20 years until 1974.

That was more than 34 years ago, and yet the man is just getting sick now. Exactly, and hardly surprising at all given the long incubation period for asbestos mesothelioma. It can lurk within the body for decades virtually undetected, until it's too late. There is no cure.

Doberstein has identified 39 defendants in his lawsuit, all having an alleged hand in his exposure, which he claims was foreseeable and should have been anticipated, and could have been prevented by the defendants.

The man is seeking both punitive and exemplary damages in his nine-count lawsuit, hoping that compensation will help with the expected hospital and medical bills, as his condition worsens. Given that his diagnosis of asbestos mesothelioma prevents him from pursuing his normal course of employment, he can no longer replenish dwindling coffers.

More ASBESTOS CANCER News
Not only has he lost a sizeable sum of money to his condition—which his lawsuit claims was preventable—he has also experienced a great deal of pain, discomfort and disfigurement.

It's only going to get worse, before it gets better.

Such lawsuits serve as a reminder that in the pursuit of the almighty dollar, it is inhumane and patently irresponsible to turn ones' back on the safety of employees. While the perils of asbestos have been known for a hundred years, the subject has not been at the forefront of public conscience until only recently. Now, suddenly, companies and corporations are waking up and righting a decades-old wrong.

The sad part, is that it's too late for people like Donald A. Doberstein, who simply got up every morning to go to work. And he's facing a death sentence from asbestos cancer and asbestos mesothelioma, just for doing that…

If you have suffered losses in this case, please send your complaint to a lawyer who will review your possible [Asbestos Cancer Lawsuit] at no cost or obligation.
Request Legal Help Now