While one community hopes that a forthcoming trial slams the owners of a now-closed vermiculite mine for making its residents sick with asbestos mesothelioma, another community appears to be downplaying the risk with an eye to their property values. 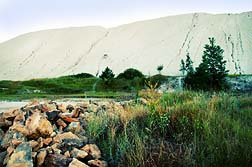 In both cases, the havoc created by asbestos, and its well-known risks to health, is taking center stage.

Today the US District Court in Missoula begins jury selection for a trial slated to begin in the spring with regard to a criminal case against W.R. Grace and six current, and former executives.

The stakes are high. No fewer than 30 defense attorneys representing W.R. Grace and various other defendants will attempt to disprove that W.R. Grace knowingly endangered the residents of Libby, Montana by exposing them to asbestos.

W.R. Grace has been accused of concealing asbestos-related health risks, allegedly as early as 1976. When the contamination was discovered in 1999, officials from W.R. Grace allegedly lied to government officials.

While the W.R. Grace trial should be nothing short of sensational, the opposite may be true in Vermont.

Late last year health officials in Vermont produced a report that revealed a higher-than-expected incidence of asbestosis and lung cancers linked to asbestos exposure among residents living near the former Vermont Asbestos Group mine at Eden.

Asbestos is a known carcinogen with a long shelf life inside the human body. In other words, decades of time can pass between asbestos exposure and the onset of disease such as asbestos mesothelioma, a debilitating condition for which there is no cure. While most sufferers of mesothelioma and asbestos are exposed on the job, asbestos fibers have been known to migrate home on the work clothes of asbestos workers, putting entire families at risk.

However, Eden residents are treading cautiously. A community group of residents did their own research and have concluded, in their view that the asbestos deaths were caused by on-the-job exposure and have challenged the report of the Vermont Health Department. The latter is taking a second look at the data, and will report back by April 1st.

In November of last year, the agency released a report that revealed 5 deaths, including those of 2 workers from the former asbestos mine at Eden, and 14 hospitalizations from 1995 to 2006, across the 13 towns that fall within 10 miles of the mine.

However, according to residents who appear to be concerned with their community's reputation, the report is incomplete. For one thing, does the 14 hospitalizations and subsequent discharges represent one person 14 times, or 14 persons once each? Or some figure in between? The residents also note that one of the deaths was to a worker with a previous history of toil in the shipbuilding industry, which is also a known harbinger of asbestos fibers.

"First and foremost we want to know we live in a healthy community," said Neil Johnston, 52, of Hyde Park. "And if we believe the medical information shows we do, then we wouldn't want misinformation about that so that people think our property's not worth much."

Outside of the residents' concerns, it is estimated that 30 million tons of residue remains at the Eden asbestos site, left over from the mining of chrysotile asbestos from Belvedere Mountain from the early 1900s to 1993, when the mine was closed down.

More ASBESTOS MESOTHELIOMA News
And while the residents don't appear to be overly concerned just yet, the State of Vermont and the Environmental Protection Agency (EPA) appear to hold a different view. Vermont has spent $200,000 to assess and contain the contamination, while the EPA has invested about $2 million to protect area waterways from tailings.

The state estimates the total cleanup bill will reach $240 million. Residents of Eden, meanwhile, are waiting for the state health department's revised report on April 1st. Until then, they appear content to play the issue down, until more information is forthcoming.

It is hoped that no one dies in the interim. As is the case with asbestos, exposure to asbestos fibers can happen anywhere, at any time. It might have happened 30 years ago. You may feel fine today.

But you could start coughing tomorrow…