There is a problem out there for prospective mothers and fathers. The problem is that instead of being able to find good information on the interplay between SSRIs (a group of antidepressants including Zoloft, Paxil and Prozac) and safe pregnancy, there is a big black void.

In its information on medication use during pregnancy and breastfeeding, the Department of Health and Human Services Centers for Disease Control and Prevention (CDC) advises: "While avoiding medications when pregnant or breastfeeding may be desirable, it is often not possible. Medications are needed to treat conditions such as asthma, epilepsy, high blood pressure, or depression. Failure to manage conditions like these may affect the health of both the mother and her infant." 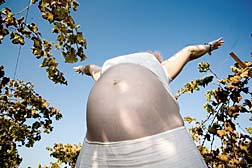 Back in February, 2006, a retrospective (after-the-fact) case-control study was published in the New England Journal of Medicine, showing that mothers who were taking SSRI antidepressants after the 20th week of pregnancy were six times more likely to give birth to an infant with a serious heart defect (PPHN—persistent pulmonary hypertension) than were mothers not on SSRIs. But the study was too small to show which of the SSRIs (if any) were the worst offenders.

The FDA soon after published an alert to physicians to consider the benefits and risks of treating pregnant women with SSRIs, alternative treatments, or no treatment in late pregnancy. But the alert also contained news of the finding published in JAMA (Journal of the American Medical Association) in the same month (February, 2006) finding that women who discontinued antidepressant medication during pregnancy had a 68% risk of relapse of major depression whereas women who stayed on the antidepressants throughout the pregnancy had only a 26% risk of relapse.

The FDA said it would provide additional information when it became available.

Depression is a serious illness, and does not miraculously disappear when a woman becomes pregnant. Apart from the acute misery of the sufferer, and his or her family, depression carries with it a significantly elevated risk of suicide. SSRIs have been life-savers for countless people fighting depression.

As for pill-taking generally during pregnancy, here's what the CDC has to say:

The American Health Association issued a statement May 22 saying that prospective parents can take positive lifestyle steps to increase the chance that their babies will be born with a healthy heart. The American Heart Association's (AHA) Congenital Cardiac Defects Committee of the Council on Cardiovascular Disease in the Young had four key recommendations for pregnant women:


It's that Number 3 recommendation that is so tricky. How can you intelligently review use of SSRIs when they have been out on the market for years, have been prescribed for years, and it's still not known how they might affect an unborn child?

If you took any SSRI antidepressant medication during pregnancy and your baby suffered any type of birth defect, please contact a [SSRI Birth Defects Lawyer] who will review your case at no cost or obligation.
Request Legal Help Now