The potential for SSRI Birth Defects would have been furthest from the minds of Lisa Rooney and Wayne Halvorsen when their infant daughter arrived in 2009. However, after their baby was born with a severe heart defect allegedly due to the SSRI antidepressant prescribed to Rooney, the Butte couple decided to take legal action. 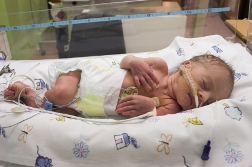 Selective serotonin reuptake inhibitors (SSRI) and serotonin-norepinephrine reuptake inhibitors (SNRI) are popular classes of antidepressants prescribed to a variety of patients suffering from emotional and cognitive disorders. However, various studies have suggested that while their benefits outweigh the risks for most patients, a point of concern remains when women who become pregnant—or are thinking of becoming pregnant—continue on the medication through the course, or a part thereof, of their pregnancy.

SSRI antidepressants have been known, in rare cases, to foster birth defects in babies. Both SSRIs and SNRIs increase levels of serotonin in the brain, however, SNRI medications also affect the levels of norepinephrine in the patient's brain.

The plaintiff's daughter has required several surgical procedures to repair a defective heart, and is expected to require additional surgical intervention to further treat a heart condition allegedly caused by the ingestion of Effexor XR on the part of the mother. Thus, the lawsuit alleges SSRI side effects were responsible for their daughter's heart problems, and their anguish as parents.

Various studies have also suggested SSRI antidepressants can trigger PPHN, or persistent pulmonary hypertension of the newborn, a rare condition involving the lungs.

The allegation is that Wyeth failed to alert doctors, pharmacists and the public at large about the potential for birth defects associated with SSRI use by expectant mothers either before, or during pregnancy. Rooney and Halvorsen also allege that Dr. Sironi continued to prescribe the drug to Rooney with the full knowledge she was trying to become pregnant. The plaintiffs also claim Sironi continued to prescribe the drug throughout Rooney's pregnancy.

Noting that Effexor XR is properly approved by the US Food and Drug Administration (FDA), a spokesperson for Pfizer told the Montana Standard the lawsuit, in Pfizer's view, is without merit. Wyeth was recently acquired by Pfizer. Rooney and Halvorsen's lawsuit will continue, notwithstanding Pfizer's stated position.