Not Enough Research on SSRIs and Pregnancy

Kerri T. wants women to know that antidepressants and pregnancy don't mix. Kerri says that she was never told about the link between SSRIs and birth defects and she believes her daughter's health problems are the result of exposure to an SSRI antidepressant.

"During my whole pregnancy, I took 300 mgs of Effexor XR," Kerri says. "My psychiatrist never told me about any of the warnings and I never saw any of the sample packets where it said that if the baby was exposed to Effexor in the third trimester there could be problems and longer hospital stays. 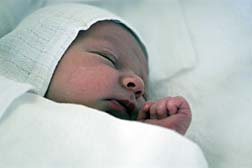 "I delivered Caroline at full term. She had no seizures during the pregnancy. She was born via C-section and immediately after birth started having seizures. The doctor took her out and took her right to NICU (neonatal intensive care unit). I couldn't even hold Caroline right away; they just took her away. She was put on 4 seizure medications and on the ventilator.

"Caroline was so stiff at birth that she needed special casts on her legs and splints on her hands. The doctor said he thought it was the Effexor that caused this.

"On January 11, 2007, we put Caroline into surgery because she was being fed through her nose at the time. The surgery was to put in a g-tube and nissan wrap (to prevent reflux) around her esophagus. That day was the first time her father and I saw her without tape all over her face and wires everywhere.

"In March she was released from the hospital. Caroline got really sick right before April and she was hospitalized again for 14 days with respiratory failure. She had 50 percent oxygen and almost died again. This past March, (2008), she had to go into the hospital again for respiratory problems.

"She had tubes in her ears because she has too many ear infections [related to her inability to properly swallow]. She is doing sign language and can say 'Mom.' She has a walker through Medicaid. She wears a patch over one eye 4 hours a day and cannot take anything by mouth. She still hasn't learned to suck or swallow and has developmental delays.

More SSRI BIRTH DEFECTS News
"I've taken her to a metabolic doctor and the tests came back negative. All of her genetic testing also came back negative. The only thing that was different between this pregnancy [and an earlier pregnancy] was the 300 mgs of Effexor. Her EEG and MRIs of her brain have been fine, although she seems weaker on one side of the brain.

"It's been quite a struggle. I have a 4 year old and during that pregnancy I took Wellbutrin and a low dose of Effexor. There didn't seem to be anything wrong, except that she was really irritable after she was born. She cried a lot and was colicky. I didn't think about it at the time, but now I wonder if she suffered withdrawal from Effexor.

"I would tell other women to try not to take antidepressants when they are pregnant. There is not enough research on it. If they really need to, they should take the lowest dose possible. I did not know about this—I was not told about everything that was going on with Effexor."