Throughout the 1990's, most doctors who attended conferences, medical seminars and other events were not aware that the so-called "key opinion leaders" encouraging them to prescribe the new generation of antidepressants for everything under the sun, including to children as young as infants, were nothing more than highly paid drug pushers for Big Pharma. 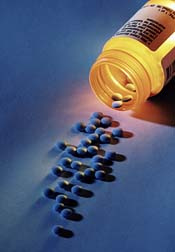 For years, the research that showed SSRI antidepressants (selective serotonin reuptake inhibitors) were dangerous and practically useless was kept hidden, while the studies published and presented to potential prescribers painted a glowing picture of success. These days, a person would be hard pressed to find someone who does not have a family member or friend labeled mentally ill and taking drugs like Prozac, Paxil, Zoloft, Lexapro and Celexa, or their chemical cousins Effexor, Cymbalta and Wellbutrin.

About once a year, a new round of headlines about all the money made by the SSRI pushers comes and goes; but nothing really ever seemed to stick, until now.

The Senate Finance Committee, with the ranking Republican, Senator Charles Grassley, leading the charge, is investigating GlaxoSmithKline. New revelations in a report filed in litigation show that the company manipulated the numbers on adverse events related to suicidality in clinical trials back in 1989, to make it appear that Paxil did not increase the risk of patients experiencing suicidal behavior when, in fact, trial subjects on Paxil were eight times more likely to attempt or commit suicide than patients taking placebos.

Quite a few of the top pushers are also under investigation by the Committee due to revelations that millions of dollars has changed hands between the SSRI makers and the academics who signed off on some of the most fraudulently reported research in the history of modern medicine. A full list of names is easy to compile by scanning the literature on SSRI studies conducted on children. The same names appear repeatedly.

On February 6, 2007, the world famous historian on psycho-pharmacology, Dr David Healy, published a commentary entitled, "Why you should never trust new wonder drugs," in the UK's Daily Mail stating:

"Ten years ago, I sat faced with boxes and boxes that contained a dirty secret. Inside were thousands of confidential internal company documents about Prozac."

"The secret they revealed was that public statements about the safety of the drug were a lie; that the company knew Prozac was responsible for a raised risk of suicide and was only slightly more effective than a placebo."

Several years later, Dr Healy recounts, he was faced with the secrets of Paxil. "No one outside the two companies, and few within them," he writes, "knew what those boxes contained; I saw them because I was an expert witness in a court case."

"Documents prised out of companies by American court cases," he says, "have become the main way we have of discovering the truth about some of our best-selling drugs."

"The scientific literature, the very place doctors would look for a warning," he writes, "contained barely a hint of problems."

"What's more, no one seems likely ever to have to answer for what appears to be fraud," he points out.

"In other organizations when evidence of disregard for public safety emerges, heads roll," Dr Healy said. "But there have been no resignations following these drug disasters - barely a flicker of embarrassment."

The UK's medicines "watchdog," the British Medicines and Healthcare Products Regulatory Agency, he reports, "has never taken any action against the academics who make fraudulent claims in ghostwritten articles, nor doctors working for the companies who repeat such claims, even when they have been shown to be untrue."

"And no one in Britain," he points out, "has any means of finding out why their husband or child might have died."

Seven years before Dr Healy wrote this commentary, in a Prozac case for which he served as an expert witness, the plaintiff's legal team learned that Eli Lilly had withheld evidence in a jury trial when the May 7, 2007 Boston Globe reported that Lilly had agreed to pay $20 million for the rights to a patent on a new version of Prozac that would reduce "akathisia," the very side effect long believed to increase the risk of suicidal behavior, three months before the trial began.

While testifying under oath, Lilly researcher, Gary Tollefson, had told the jury, "there is absolutely no medically sound evidence of an association between any antidepressant medicine, including Prozac, and the induction of suicidal ideation or violence."

More SSRI News
When in fact, the wording in the patent for the new formula stated "fluoxetine (Prozac) produces a state of inner restlessness (akathisia), which is one of its more significant side effects," and the "adverse effects which are decreased by administering the R(-) isomer of fluoxetine include but are not limited to headaches, nervousness, anxiety, insomnia, inner restlessness (akathisia), suicidal thoughts and self mutilation."

Patients who lived to talk about a failed suicide attempt have described the SSRI-induced akathisia, as being so unbearable that their only option for relief seemed to be death.

Next Week, part 2: America's Most Wanted

Evelyn Pringle is a columnist for Scoop Independent News and an investigative journalist focused on exposing corruption in government and corporate America.