Although the St. Jude heart valve that contained Silzone was recalled in 2000, studies have been carried out since that time to determine the risks associated with the Silzone mechanical heart. Those studies confirm the defective heart valve poses a risk to patients, although some studies vary on what the risk is. 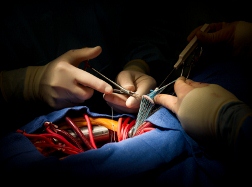 One study, published in the September 2003 issue of Heart, examined the experiences from the Cardiff Embolic Risk Factor Study. The goal of the study was to examine patients with the Silzone-coated sewing ring on the heart valve to determine what the possible adverse effects were and to develop recommendations for follow-up with those patients.

Researchers found patients with the Silzone mitral valves had a high rate of early postoperative embolism, but did not suffer from paravalvar leak. Patients with the Silzone tended to have adverse effects within the first three months following their operation to implant the valve. The study's authors noted that the increased incidence of embolism was unexpected. "The event rate of major thromboembolism was an order of magnitude higher than the published values for the St. Jude standard valve, and also higher than the rate observed in patients who received the St. Jude standard valve in our study," the authors wrote.

More ST. JUDE SILZONE News
They noted that because the study showed the thromboembolic risk within three months of implantation, patients who have had the valve for a long period may not be at an increased risk. They found that there were higher incidence of reoperation, death and endocarditis in patients who received the Silzone, but the increase was not statistically significant.

A different trial, the Artificial Valve Endocarditis Reduction Trial (AVERT) was stopped early because it found an increased risk of paravalvar leak. Researchers in that trial found approximately 2.7 percent incidence of paravalvar leak in patients who received a Silzone-coated valve, compared with a 1.0 percent incidence in patients without the Silzone.

The Silzone-coated valves were designed to provide antibacterial protection to patients, to reduce the incidence of prosthetic endocarditis. The valve was approved by the US Food and Drug Administration (FDA) in 1998 and approximately 36,000 of the valves were implanted before they were withdrawn from the market due to paravalvar leaks.

If you or a loved one have suffered losses in this case, please click the link below and your complaint will be sent to a drugs & medical lawyer who may evaluate your ST. JUDE SILZONE claim at no cost or obligation.
Request Legal Help Now