A move by Sallie Mae (SLM Corporation) to cut back on its core business has resulted in the corporation taking a stock hit. After the move was announced January 3, SLM Corporation stock dropped a sizeable $2.49 per share, closing at $16.67 per share.

This announcement, together with the resulting drop in share price, may have negatively impacted the value of Sallie Mae (SLM Corp) retirement savings plans and 401(k) Plans, which the corporation carries responsibility to manage prudently according to regulations set forth in the Employee Retirement Income Savings Act (ERISA) of 1974. 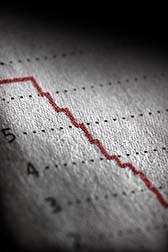 Like so many before it, the credit crisis lay at the root of Sallie Mae problems. However, a new federal law doesn't help, either: the slashing of subsidies to private companies that make government-backed student loans. The foregoing, together with the credit turmoil, prompted the move by SLM Corporation to be 'more selective' in the issuance of student loans.

Unfortunately, the news delivered a one-two punch to Sallie Mae stock, and retirement savers might be down for the count, as a result.

The trouble with retirement is that you only get one chance to get it right. The earlier you start, the better. In fact, some of those students to whom Sallie Mae is now 'selectively' loaning money to, would be wise to sock a couple of dollars away per month into a retirement savings plan, even in view of the fact that retirement is so far off.

And yes, there are loans to repay and there's that first house to buy, and a family to raise. But an early start, no matter how small experts say, can take advantage of compound interest and could put you well on your way to having that nest egg you'll want, and need for your twilight years.

But few people have the discipline, or the vision to carry through. Thus, the starting of families and the maintenance of careers take precedence. Only at mid-life do most people elect to either start taking their retirement saving seriously, or are finally in a financial position to start putting a few dollars away.

And many do that through the corporations for whom they toil. Employees of Sallie Mae, and SLM Corporation will have had the opportunity to invest retirement money in Sallie Mae and SLM Corp retirement funds and 401(k) Plans, as part of their retirement strategy.

For its part, and akin with any corporation managing 401(k) plans on behalf of their employees and investors, Sallie Mae and SLM Corporation have a responsibility under ERISA to manage the assets of the funds and Plans prudently.

A breach may have occurred if the fiduciaries failed to manage the assets of the Plans prudently and loyally by investing the assets in Company stock when it was no longer a prudent investment for participants' retirement savings.

The real concern, of course, is that Sallie Mae and SLM Corporation isn't the only company taking a sizeable hit at the feet of the sub prime mortgage meltdown and credit crisis. Dozens of companies have reported historic losses, and this can serve as a domino effect within the context of similar losses incurred by funds and retirement 401(k) Plans tied to, and invested in those plummeting stocks.

Thus, hundreds of thousands of retirement savers could be in a state of panic, given the fallout.

The recent multi-billion dollar bailout passed by Congress will not help retirement savers who have lost value in their portfolios, and precious time to build them up. The most favorable forecasts point to anemic growth at best for the next few years, and while analysts are confident that the economy will eventually recover, it may not recover in time for those retirement investors and holders of 401(k) plans.

You only have one shot at retirement saving. And when you run out of time, that's it.

If you have suffered a Sallie Mae ERISA stock loss, please contact an [ERISA Lawyer] who will review your case at no cost or obligation.
Request Legal Help Now