The U.S. Food and Drug Administration (FDA) on Wednesday issued an Early Communication release stating that it is investigating a possible association between tumor necrosis factor (TNF) blockers and the development of cancers in children and young adults. The TNF blockers were prescribed to treat Juvenile Idiopathic Arthritis (JIA), Crohn's disease or other diseases.

According to the news release, the FDA is investigating approximately 30 reports submitted to its Adverse Event Reporting System over a ten-year interval, beginning in 1998 and extending through April 29, 2008. These reports described cancer occurring in children and young adults who began taking TNF blockers (along with other immuno-suppressive medicines such as methotrexate, azathioprine or 6-mercaptopurine), when they were ages 18 or less. 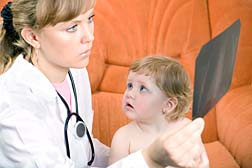 Approximately half the cancers were lymphomas and included both Hodgkin's and non-Hodgkin's lymphoma. Other cancers reported included leukemia, melanoma, and solid organ cancers.

The FDA has asked the makers of the TNF blockers approved for use in children (Remicade, Enbrel, and Humira) to provide information about all cases of cancer reported in children taking TNF blockers. The maker of Cimzia is required to conduct a study to assess long-term risks of the product, including lymphoma and other cancers. This study will begin in 2009 and take about 10 years to complete.

Remicade was developed by Centocor, Inc. and is currently manufactured by Schering-Plough Corp. Enbrel is made by Wyeth, Humira is made by Abbott Laboratories, and Cimzia is made by UCB SA. According to the Associated Press, the TNF blockers are key revenue drivers for the companies. Humira was Abbott's best-selling product last year with over $3 billion in sales. Remicade led Schering-Plough's sales at $1.65 billion.

Abbott said in a statement that the safety of Humira was reviewed in February when the FDA first cleared it for use in juvenile arthritis. To date, Abbott has not recorded any instances of lymphoma in children.

TNF inhibitors work by blocking the action of TNF-alpha, a substance in the body that causes inflammation. They are used to relieve the symptoms of certain autoimmune disorders (conditions in which the immune system attacks healthy parts of the body and causes pain, swelling, and damage) including:

- rheumatoid arthritis (a condition in which the body attacks its own joints, causing pain, swelling, and loss of function)

- Crohn's disease (a condition in which the body attacks the lining of the digestive tract, causing pain, diarrhea, weight loss, and fever)

- ankylosing spondylitis (a condition in which the body attacks the joints of the spine and other areas causing pain and joint damage),

- psoriasis (a skin disease in which red, scaly patches form on some areas of the body), and

- psoriatic arthritis (joint pain and swelling and scales on the skin).

A study of Remicade and Humira, led by investigators at the Mayo Clinic, (Journal of the American Medical Association, May 17th 2006), cited an increased rate of several types of cancer and of serious infection. The authors of the study suggested that anti-TNF treatment may simply accelerate the detection of preexisting cancer, rather than induce more cancer over the long run. They also suggested that lower doses of anti-TNF treatment may reduce or avoid these adverse events.

Considering the serious health consequences of autoimmune disorders, the low risks of increased adverse events, and the high rate of clinical improvements, the 2006 Mayo Clinic study did not change the perceived balance of efficacy and safety.

In the May 19th, 2006 news release announcing the approval of Remicade for Children with Crohn's Disease, the FDA mentioned the Mayo Clinic study, and stated that, in general, the safety profile for Remicade in the pediatric trial was similar to the data that had been presented at an FDA Arthritis Advisory Committee meeting in March 2003. The meeting dealt with the extent to which anti-TNF therapies may increase the risk of serious infections and malignancies, such as sepsis and pneumonia in certain patients.

The same news release also informed the public that it had received rare post-marketing reports of an aggressive and often fatal type of T-cell lymphoma (hepatosplenic T-cell lymphoma) in adolescent and young adult patients with Crohn's disease. In most cases, these patients were treated with standard immunosuppressive therapies (azathioprine or 6-mercaptopurine) in combination with Remicade. The FDA also stated that these risks were already included in the labels for all approved TNF-alpha blocking agents, including Remicade, and it was working with the manufacturer to address this risk by updating the Warnings sections of the Remicade label.

The Warning section of Remicade's label states that Infliximab may decrease patient's ability to fight infection and increases the risk that they will get a serious or life-threatening infection. Patient's are asked to tell their doctor of all the places they have recently visited or plan to visit while using Infliximab as they could be infected with tuberculosis and not have any symptoms.

The FDA also stated that it still believes that the potential benefits of the use of TNF blockers outweigh the potential risks. Long-term studies are necessary to provide definitive answers about whether TNF blockers increase the occurrence of cancers in children because cancers may take a long time to develop and may not be detected in short-term studies. Until the evaluation is completed, healthcare providers, parents, and caregivers should be aware of the possible risk of lymphoma and other cancers in children and young adults when deciding how to best treat these patients.