Reglan: "I started shaking right away"

Kimberly Cole was a healthy, vibrant professional woman, wife and mother-until the day she was injected with Reglan prior to a scheduled surgery. The procedure was cancelled after she started having tremors literally within minutes of receiving the injection.

That was back in late 2006. She's since had her surgery, but the tremors have continued. Kimberly is currently under the care of a neurologist.

"As I was to go into the surgery, the nurse walked in and gave me two shots...didn't even say what they were," Kimberly says, "and within just a few minutes I told her that I thought something was wrong, because I started to get real hot, and then I started shaking all over. My husband was there, and he said I basically turned like a jaundiced yellow. 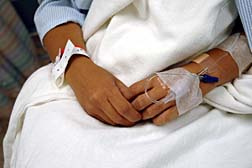 "I was actually lying there in pre-op when they gave me the injection. Ready for the surgery. And then I started shaking so bad, they had to cancel the surgery."

She eventually had the surgery to correct a fallen uterus.

Reglan is known clinically as metoclopramide hydrochloride, and is often used to prevent post-operative nausea and vomiting. One of its many adverse effects is Tardive Dyskinesia, a condition that presents as involuntary movement of facial muscles - something you often see in elderly patients. However, Reglan has the capacity to induce the symptoms at any age, even at low doses - and it is potentially irreversible.

Kimberly appears to be suffering from another of Reglan's adverse affects - Parkinsonian-like tremors. The 40-year-old mother of two has been checked out, and an MRI has determined that the tremors she is experiencing in her head and hands are not Parkinson's.

Her doctors are non-committal. Kimberly says they have offered that the Reglan 'could have' produced her tremors, but will not venture anything further. In her own mind, Kimberly can't see any other cause. She was fine prior to the Reglan injection.

Since then, the shaking hasn't stopped. You can actually hear the tremors in her voice, over the phone from her home just outside Charlotte, in North Carolina.

The tremors have left this relatively young woman, who works as an executive assistant, with a number of challenges, including the effect it has on her writing. "I'm left-handed and it's hard," she says.

More News
She also says it's been tough on her family, and especially her six-year-old son. "He'll actually grab my head and say, 'quit shaking'."

It's taken quite an emotional toll on everyone. As for her job, her employer is very understanding and is helping her through this ordeal. "Sometimes they notice (the shaking), but they know that I'm on medication." Her employer, thankfully, is also very understanding over the need to take time off work for her medical appointments.

Kimberly says her neurologist has broached the idea of an implant, inserted surgically into her head to control and mitigate the tremors. But the patient will have no part of that.

Instead, Kimberly expects that she will be on medication for the remainder of her days to control the shaking.

She's convinced that it was the Reglan injection, which was responsible.

If you or a loved one has experienced tardive dyskinesia or NMS while taking Reglan, please contact a lawyer involved in a possible [Reglan Lawsuit] who will review your case at no cost or obligation.
Request Legal Help Now

Posted by
Charles
on August 25, 2015
hi, my girlfriend of 4 years recently in the past year have been suffering from tremors or what the neurologist called it "benign essential tremors" after taking Reglan.when we first got together she always suffered from stomach issues and the doctors couldn't figure out what was wrong. They put her on a medication for her stomach issues, I don't remember the name of it but she started having tremors in her head. It started small little shaking but was constant till it got so bad that she had to go to the emergency room. They told her that it was a reaction to her depression medicine she was talking but the only new medicine she was talking was the one for her stomach. So I had her stop taking that stomach medicine and they changed her depression medicine.The tremors stopped but her stomach issues continue. So the doctors did some tests and they found out that her stomach was digesting to slow causing bacteria to grow in her stomach causing her stomach issues. So he wanted to try raglan and he told us the side effects and she was desperate to fix her stomach issues she was willing to try it. We got the prescription and she took one pill and had a tremor so of to the emergency room we went, they told her she should be fine that it will go away and one pill wouldn't cause the permanent side effect. So we went home and the tremors went away. Then a few weeks later the tremors came back in her head but they come and go and still do today. Some times they are really bad and she hurts afterwards and a lot of Times have a really bad headache with them. The neurologist told her that it was benign essential tremors and just gave her valium for the tremors and didn't bother doing any real tests or anything. But thanks to this story I think we have the real reason behind her tremors, at least when we get her a new neurologist we have something to go off. We knew that reglan cause that but for the neurologist to just shrug her off like that didn't make us to happy. So thanks for this story it seems like it is helping us get one step closer to figuring out what is truly going on with her.