With Reglan side effects that include a risk of Reglan tardive dyskinesia—a condition marked by involuntary muscle spasms and twitching—the US Food and Drug Administration (FDA) now recommends that Reglan be taken only for short-term use. According to the FDA, to avoid Reglan drug side effects, Reglan should not be taken for more than three months. Francis Davis took Reglan for much longer than recommended. 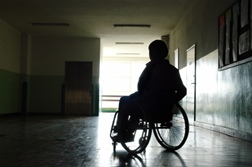 "I took Reglan for about 26 years," Francis says. "I had no breaks while I was taking it; it was a steady diet of Reglan daily. I never knew about side effects until I did some reading about it.

"I was prescribed Reglan for those 26 years. I didn't just take it on my own. I was told, when I first started, that I'd have to take it for the rest of my life. It was prescribed for stomach ulcers; bleeding in the stomach area. Now, you're only supposed to take it for three months at the most. But 26 years ago, I was told it was a lifetime drug.

"A neurologist I went to wouldn't say that I have tardive dyskinesia, but I have severe muscle spasms—they don't know if they're spasms or cramps; I guess there's a difference—but the spasms are painful no matter how you look at it. They're painful and I don't know what's causing them.

"I was at my neurologist no less than three weeks ago and I was having a severe bout of cramping and spasming and he witnessed a 20-minute episode where I was locked up in a kinked-over position in my wheelchair. I couldn't move.

More REGLAN News
"It's been about a year since I stopped taking Reglan. I still, to this day, feel like I have tendonitis of the whole body and I believe it's because of this Reglan. My fingers will lock up and I can't even push the joysticks on my wheelchair. It's incredibly painful. Any time I do anything repetitive, like sewing a button on, I can't finish it. I'll get such severe cramps that my hand will lock up and I can't pry my fingers apart. And this is what I'm experiencing.

"I've had it for a long time. I think I first experienced this about 1989 or 1990. It's gotten progressively worse since that time. It is severe now. I'll get a muscle cramp in my abdomen, where I can't even move. I have twitching in my mouth and eyelids. That's not as painful, but the rest of it—the pain is excruciating.

"The problem hasn't improved since stopping the Reglan. I still have cramping periods. It's an everyday thing."