An Ohio man who was wrongfully arrested, beaten by cops, and locked in a closet for four days was recently awarded $22 million by a jury for his ordeal. 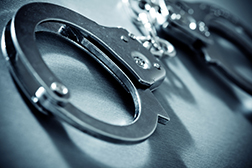 According to The NY Daily News, Arnold Black sued East Cleveland police over his wrongful arrest and detainment that occurred in 2012, alleging “a pair of officers mixed up his car with that of a suspected drug dealer and wrongfully took him into custody. One of the cops reeked of alcohol - and punched Black for ‘messing up’ his night at the bar, according to the lawsuit.”

Black was pulled over in his green pickup truck in April 2012, at a time when the police were looking for a green truck carrying cocaine. Officers Jonathan O’Leary and Randy Hicks pulled him over, and then Black alleged Randy Hicks punched him in the head, and O’Leary didn’t try to stop him. They brought Black to jail, but they chose to lock him in a storage closet instead of a jail cell, where he spent four days trapped inside the tiny space with no food, water, toilet, or bedding.

After four days, the police let him out and Black was allowed to consult with a lawyer. Also according to the article, “Two months later, a grand jury indicted Black on cocaine charges - even though police had no evidence to support the drug was ever in his possession. The case was later dropped, and Black filed his lawsuit in 2014.” A jury in Cuyahoga County recently awarded Arnold Black $22 million for the four-day ordeal he went through.

Chris Janish, CEO of Legal-Bay, commented on the recent news, “Due to the vicious nature of these crimes, we stand ready to assist those who have been faced with police brutality, prison injury, or wrongful imprisonment. We want to remind victims or their loved ones who may find themselves in a similar situation that we are here to assist them today with getting their lives back on track immediately.”

Click to learn more about LawyersandSettlements.com
LawyersandSettlements.com is an online news and information site for the general public and legal community. As a legal news resource, we have emerged as an independent & trusted voice. We provide detailed and quality information on various lawsuits filed including Personal Injury Cases, and Civil & Human Rights Cases.