Firing “At-Will” Not the End of the Story 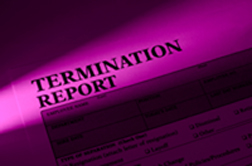 At-will employment means that an employee can be fired for no reason at the whim of the employer. But, there are certain circumstances in which an employee cannot be terminated. These include for discriminatory reasons (such as being fired for race, gender or national origin), for refusing to commit an illegal act, for filing a workers’ compensation complaint, for discussing working conditions or wages, and for retaliation if the employee acts as a whistleblower or files a complaint about working conditions.

In other words, just because an employee is fired in an at-will state does not make that the end of the story.

One lawsuit was filed in New York alleging a woman was fired from her job for complaining about sexual harassment. The plaintiff, a former secondary at a college, alleges she was sexually harassed by a professor at the college, while she worked for the dean. According to New Rochelle Talk of the Sound (7/16/13), the plaintiff told a supervisor about the harassment but no action was taken. She further alleges that during a work performance review she complained that no action was taken and was put on paid administrative leave.

Many employees think that because they are employed in an at-will state, they are prevented from ever filing a lawsuit if they are fired from their job. There are circumstances in which they cannot file a lawsuit. For example, in an at-will state an employer can fire a person for no reason, with no warning and with no notice. But if the employee is fired for one of the prohibited reasons, a wrongful termination lawsuit can be filed to protect the employee’s rights, reinstate the employee to the position and/or recover lost wages. Furthermore, if the termination is in violation of an employee contract, explicit or implied, the employee can file a lawsuit.

Posted by
Debra
on May 21, 2015
I have worked for a Private employer, as First Mate & Stewardess on their 85' Private Yacht for one year. I was just terminated, after telling the owner about sexual harrassment, and hostile work environment caused by the Captain of the Yacht.
The owner stated he would address the concerns with the Captain, and get things worked out. Even though I made several attempts over a year to work things out with the Captain directly, then escalated it to the Estate manager, and then the owner.
The owner then asked me if I would like the summer off with full pay as retainer, due to the yacht was sold, and the new build yacht would not arrive until the fall 2015. He made the offer, I agreed to the offer.. all being verbal and nothing in writing. I offered my assistance over the summer with anything they would need. After receiving 1 paycheck, and also receiving 2 phone calls from the owner stating the agreement would continue until arrival of new boat, I then was requested by the Captain, to meet and discuss the new boats arrival timeline and such. I met with the Captain, and was informed that I was being terminated, my last pay check would be the 15th of May, and if I wanted to come back to work upon arrival of new boat.. it would only be as day work, at a day pay rate.
I was hired by a Captain that hires women in hopes he would have a "relationship" with them, and when it is apparant that relationship would not happen, he hazes, ignores, pinches my butt, watches girlie vidoes and shows them to me, the owner and others while in my presense. Captain has defamed my character by posting rude comments about me on his social media site, will do anything possible to tick me off enough to want to quit. Everything Captain told me, he said that was the wishes of the owner to Breach the verbal agreement, and to terminate me. I have spoken to the owner, and he infact told me that it all was the captains Idea, to terminate me, and that it had nothing to do with my work performance, and that the Captain persuaded him and he went along with it.
I have been wrongfully terminated, sexually harrassed, worked in a hostile work environment, and a verbal contract retracted.
I have been told by 5 separate lawyers, that I have a strong case on multiple fronts, however... in the State of Florida... if the employer has less than 15 employees.. I can not file suit and they basically get away with breaking the law and causing harm to the employee that was terminated.
If anyone knows a way to get help on this issue... please contact me back...Thank you.

Posted by
Denise Tieku
on October 23, 2013
worked with OCFS as a youth Counselor. Was not informed that the job required physical training. At the first attempt at training I failed due to a knee problem. I was given an opportunity to redo the physical. Before being sent back for the training, I incurred injury to my neck in one incident and a second to my finger due to on the job injury. Both required worker's comp documenting, but the office staff discouraged me from filing for worker's comp. The supervisor insisted that I completed the physical restrain class (even though I had a thumb which was damaged on the job. During the second physical restrain class, I could not close the handcuff due to the injured finger I sustained on the job. I was terminated. Worker's comp representative said that I should have been notified by my supervisor of the right to worker's comp, of the right to file and the right to seek medical attention due to the neck and the thumb injury sustained on the job. I cannot get a job due to the injury to my thumb resulting in what is called "a trigger finger" and injury to my neck resulting in excruciating pain. Can I BE HELPED