A Toronto surgeon who is being sued by upwards of 100 former patients for medical negligence cannot escape scrutiny by resigning from the hospital where he performed the surgeries, according to a recent ruling by the Health Professions Appeal and Review Board. Dr. Richard Austin, who so far has an unblemished record on the official Web site of the College of Physicians and Surgeons of Ontario, will face a public hearing before the College. 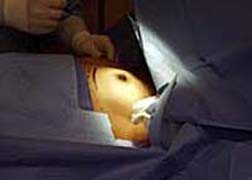 The Toronto Star reported December 8 on the case of former patient Joan Jaikaran, who filed a complaint against Dr. Austin in November 2006 alleging negligence following surgery to address an ovarian cyst.

According to the report, Jaikaran underwent surgery early in 2006, only to return to the hospital three days later for emergency surgery to treat inflammation of her abdominal lining caused by pus and feces. Jaikaran was required to wear a colostomy bag for the next seven months, and alleges the surgeon sliced her bowel during surgery. The plaintiff also alleges in her negligence lawsuit that the defendant was incompetent, his technique poor and his follow-up inappropriate.

The Star referenced an investigation conducted by the paper in 2007 during which experts apparently revealed that Austin's complication rates and 'unintentional cuts' to internal organs were beyond acceptable limits. The newspaper also reported at the time that the surgeon continued to practice medicine at Scarborough General Hospital, located in a suburb of Metropolitan Toronto, in spite of 14 lawsuits filed against him since 1991.

In assessing the potential negligence liability of the Jaikaran case as it related to Dr. Austin, the College of Physicians and Surgeons of Ontario noted that Dr. Austin's surgical privileges were first restricted, followed by the voluntary resignation of the doctor. Thus no further action was warranted, in spite of a finding that the surgeon "failed to meet the standard of care."

More NEGLIGENCE News
The provincial review and appeal board, early this month, overturned that ruling and will require the surgeon to face a hearing with regard to the alleged negligence. The appeal board found that the "egregious breach of the standard of care" alleged in Jaikaran's complaint "necessitates a full airing" to save the province's medical service from "disrepute."

The Star reported that during the initial 2006 operation Dr. Austin, who holds credentials as an obstetrician and gynecologist, removed Jaikaran's entire right ovary. The plaintiff questioned the need to completely remove the ovary since the ovarian cyst was found to be benign.

Negligence law exists to protect citizens from the alleged failings of service providers, in various industries. The medical profession is not immune. "Future individual patient safety is only one part of the public interest," the ruling by the provincial appeals board states. "The public's perception of, and faith in, the medical profession is just as important," adding that "retirement, which may or may not be permanent, does not seem to suffice."

If you or a loved one have suffered losses in this case, please click the link below and your complaint will be sent to a malpractice lawyer who may evaluate your Negligence claim at no cost or obligation.
Request Legal Help Now

I have read about Joan Kaikaren. I am writing to say that I have JUST gone thru the very same thing. I was left for 8 days after my initial surgery for my ovaries until on the 8th day I burst open and was laying in my own feces. 8 hours after that I was taken for a repair surgery. 22 days in the hospital and then after I came home serious infection set in and I had to go for another surgery! I still have the holes in my stomach. The doctor that did this with my bowel has also harmed many other women, some of whom I know personally. So where can I go from here? How did it turn out for Joan and can I get in contact with her? Please repond.