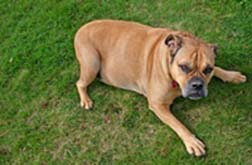 The concern is that the pet food may contain traces of aflatoxin, a chemical byproduct that could prove harmful to animals. The Centers for Disease Control and Prevention (CDC) in Atlanta identifies aflatoxin as a fungal toxin contaminating maize and other crops during harvest storage, production or processing.

Pets that show sign of aflatoxin poisoning will exhibit sluggishness or lethargy not normally associated with their regular behavior. Pets may, in combination with the aforementioned, resist eating and go off their food. A yellowish tint to the eyes or gums, together with the emergence of diarrhea are also noted as warning signs—as is the appearance of "severe blood," although the company did not specify if the blood appeared in the stool, or elsewhere from the animal.

That said, any of the above together with severe bleeding of any kind should necessitate an immediate visit to the veterinarian.

Previous recalls for contaminated pet food made by other manufacturers have caused pets to become sick, and even die. Such an event can be devastating to pet owners, whose animals are treated as family—and for many pet owners living alone; a pet is a valued source of companionship.

Many pet owners traumatized by the sudden illness and death of an otherwise healthy animal have sued a pet food manufacturer for compensation over their loss.

Posted by
Ramona Spaulding
on December 10, 2021
bought the dog food several times made our great danes very sick and sluggish