IVC Filters: There is no Standardization of Care

The more one digs into the IVC filter debacle, the more one realizes the Catch 22 which appears to govern the existence of the small, spider-like devices designed as a hedge against the migration of potentially dangerous blood clots through the inferior vena cava vein, the major thoroughfare that carries blood up from the lower extremities, where blood clots can form. 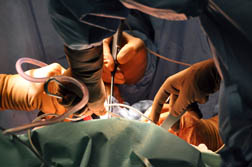 For one, the inferior vena cava filter (IVC filter) is designed to capture, or snag blood clots and keep them from migrating to the lungs. But IVC filters themselves have been known to become dislodged from their primary insertion point, and migrate. The resulting IVC filter migration can pose a host of risks to the patient. Struts have broken off and have been found to migrate to the heart, or become imbedded in aortic tissue, or other organs.

The US Food and Drug Administration (FDA), for its part, keeps reminding the medical community that most IVC filters were designed to be temporary devices only and thus should be removed within 29 to 54 days once the threat of a pulmonary embolism has passed. That’s the ideal. The six-month interval is the point at which risk can greatly increase.

However, in most cases they are not retrieved, adding to the IVC filter side effects risk for the patient. There have been IVC filter deaths reported. In other cases, patients have come dangerously close to death when a migrating IVC filter reaches the heart or other vital organs and tissue.

IVC filters, including the Bard G2 IVC filter (lawsuits for which have been consolidated for multidistrict litigation in Phoenix), are used only as a last resort when patients are found to be unable to tolerate blood thinners, or the threat of blood clots are so great that anti-coagulants are not sufficient to effectively ward against the formation of blood clots.

The blood clot itself can be deadly, if allowed to migrate to the lungs. IVC filters, including the Bard IVC filter and those made by other manufacturers including Cook Medical, are deployed in the inferior vena cava and designed to capture a migrating blood clot and hold it in place, until the clot dissipates gradually on its own.

The IVC filter is only meant as a temporary response to a more immediate, and compelling blood clot risk. The overall risk to a patient’s health increases the longer an IVC filter is left in the patient’s body.

But various studies have determined that the majority of IVC filters are not successfully removed, and certainly not within the window of removal recommended by the FDA.

One of the reasons we have already alluded to: the migration of an IVC filter away from the original insertion point to become lodged in tissue or vital organs to a degree where any attempt of retrieval could put the patient at risk.

True. But the patient is also at great risk the longer a retrievable IVC filter remains in place.


Another problem, according to an interventional cardiologist with the St. Luke’s Hospital and Medical Center in Phoenix, is that all too often the emergency room physician or interventional radiologist responsible for inserting the device in the first place, don’t have an ongoing relationship with the patient going forward.

“They’re good at putting them in and taking them out, but they have no relationship with the family,” said Dr. Richard Heuser, who serves as chief of cardiology at St. Luke’s, in a statement give to the Phoenix Business Journal (06/21/16). “From the consumer standpoint, if you have one placed, you need to make sure to follow up with your primary care physician and ask when it should be taken out.”

Dr. Nathan Laufer, director of the Heart and Vascular Center of Arizona ??" and one who has yet to personally come across a case where an inferior vena cava filter has migrated or broken apart ??" notes that, “you need to have strong indications for putting them in,” Laufer said in comments to the Phoenix Business Journal. “[There] are very diverse practice guidelines, depending on which society you talk to.

“There is no standardization with the medical community.”

The other Catch 22: lack of standardization of care

More IVC FILTER News
Meanwhile, plaintiffs continue to file an IVC filter lawsuit alleging a defective product. Bellwether trials for Cook Medical are about to start, with C.R. Bard due up in 2017. According to a recent C.R. Bard 10-Q filing with the US Securities and Exchange Commission (SEC), the number of Bard IVC filter lawsuits pending in multidistrict litigation in Arizona number in the hundreds, with 30 or more also pending in various state courts and a Canadian class action filed in the province of Quebec this past March.

C.R. Bard introduced the G2 IVC filter some time ago following problems with an earlier device. However there was no IVC filter recall issued, and plaintiffs assert that C.R. Bard continued to market their troubled IVC filter while aware of the ongoing problems and risk to patients, or so it is alleged. The Bard G2 filter, when it was finally released, has been described as carrying little improvement over the device it replaced.