More than 300 IVC lawsuits have been filed, alleging patients who had the medical devices implanted were put at risk of serious complications, including having the inferior vena cava filters break. Patients who have been implanted with retrievable IVC filters may be at a risk of complications if the filter is left implanted for too long, according to reports. 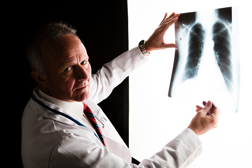 Inferior vena cava (IVC) filters are designed to prevent blood clots from traveling to the lungs, causing a pulmonary embolism. The legs of the filter are designed to trap blood clots, stopping the clots from causing deadly pulmonary embolisms. Some patients are put on anticoagulants (blood thinners) to prevent the risk of blood clots, but not all patients are able to take anticoagulants. For those patients, IVC filters can be implanted to trap the clots.

The problem is that some filters are allegedly at a higher risk of fracturing than other filters. Plaintiffs allege that parts of their filters have broken free from the filter and migrated to other organs or perforated their veins. These complications are potentially life-threatening.

Some patients may be put at risk of device failure because retrievable IVC filters are allegedly left in too long. One study, published in JACC Cardiovascular Interventions (4/16), noted that except for congenital anomaly, unretrieved IVC filters are the most common cause of IVC thrombosis.

“Due to the substantial increase in the number of IVC filters placed in the United States and the very low filter retrieval rates, clinicians are faced with a very large population of patients at risk for developing IVC thrombosis,” the study’s authors wrote. They also noted that there is very little published information on IVC thrombosis.

More IVC FILTER News
Not all IVC filters are retrievable. But those that are retrievable are reportedly being left implanted for too long, putting patients at risk of device migration or fracture. As a result, in 2010, the FDA issued a safety communication noting that retrievable devices should be removed as soon as the patient no longer requires protection from pulmonary embolism.

Based on a quantitative analysis, the FDA suggested that “if the patient’s transient risk for pulmonary embolism has passed, the risk/benefit profile begins to favor removal of the IVC filter between 29 and 54 days after implantation.”

The FDA also noted that it is collecting additional data regarding permanent and retrievable IVC filters in the United States.

There are currently two multidistrict litigations concerning IVC filters in the United States. As of March 15, 2016, 289 lawsuits against Cook Medical were consolidated in MDL 2570. As of the same date, there were 93 lawsuits consolidated against Bard in MDL 2641.