GlaxoSmithKline has asked the Canadian government to hold back a batch of H1N1 vaccine that could be linked to a higher rate of severe allergic reactions. The batch that is being held back was shipped in late October and had the lot number A80CA007A. Approximately 170,000 doses are affected by the recall. 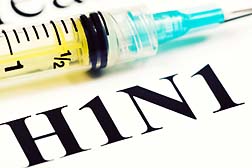 "GSK is taking this cautionary action because the Public Health Agency of Canada has received a higher than expected number of reports of anaphylaxis in this lot number compared to other lots," the company explained in a written statement.

According to a November 19 article by the Canadian Press, the reactions have been short-lived and have not caused any permanent injuries. CTV News reported on November 20 that of the 6.6 million doses of the vaccine given so far in Canada, there have been 36 reports of serious adverse reactions. Most of those reactions were allergic reactions that began within moments of the vaccination.

However, one Canadian reportedly died from anaphylactic reaction following a vaccination with the H1N1 vaccine. Medical officials have not yet conclusively linked the death to the vaccine.
READ ABOUT INFLUENZA VACCINE LAWSUITS