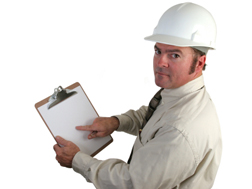 The US Department of Labor's Occupational Safety and Health Administration (OSHA) fined US Minerals LLC for exposing its workers to hazardous materials and not providing proper protection to its employees. In all, 28 health and safety citations were given with penalties that could reach up to $396,000.

According to an OSHA news release (12/07/10; osha.gov), the dust that workers were exposed to can cause serious lung disease. The facility was investigated under OSHA's Severe Violators Enforcement Program, which focuses on employers who repeatedly or willfully put their workers at risk of serious harm.

At least seven of the Coffeen plant's citations were repeat citations—given when an employer has already received a citation for a similar violation at any other federally regulated facility within five years.

"U.S. Minerals has severely jeopardized the health and safety of its workers by exposing them to extremely high levels of hazardous dust and other dangers," said Assistant Secretary of Labor for OSHA, Dr. David Michaels. "This is the fourth U.S. Minerals facility where very serious violations were cited in the past three months, clearly indicating these problems are widespread and systemic. This blatant disregard of workers' health and safety is not acceptable."

More ILLINOIS LABOR LAW News
Violations reportedly committed by US Minerals at the Coffeen plant include exposing workers to higher than permitted levels of hazardous dust, failure to require employees to wear respirators, failure to provide proper training and inadequate training on dust that contains silica. Of the citations, 10 were deemed serious citations, meaning there is a high probability that death or serious injury could be caused by a hazard that the employer either knew or should have known about.

The US Minerals Coffeen plant was investigated after an OSHA investigation found 35 health and safety violations at the company's Baldwin, Illinois, plant. The Baldwin plant citations resulted in a $466,400 penalty for the company. Meanwhile, a US Minerals plant in Galveston, Texas, received $273,000 in fines for 38 violations. The company's headquarters are in Dyer, Indiana.

Posted by
ruben briceno
on August 27, 2012
i can relate to the story. i work at suger steel corperation warehouse area. wich is located in chicago heights illinois. we have to deal with steel where in most part has rust and dust we breath during our working hours. now could that be dangerous?