A deadly bacteria that killed nearly 19,000 people in the US in 2005 may be so common, and so deadly, that it has the capacity of exceeding the death rates from HIV-AIDS, Parkinson's disease, emphysema, or even homicide.

In other words, the very places you go to get well, or the haven for your twilight years, could kill you, given the presence of the germ.

MRSA is not new, but the research is--an exhaustive government study conducted by researchers associated with the Centers for Disease Control and Prevention (CDCP) in Atlanta, and appearing today in the Journal of the American Medical Association (JAMA). 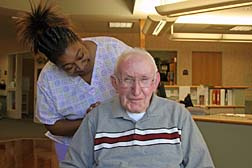 The research suggests that MRSA infections are twice as common as previously thought, according to lead author Dr. R. Monina Klevens. The study suggests that the risk translates statistically to 32 cases per 100,000 people.

"This confirms in a very rigorous way that this is a huge health problem," said Dr. John A. Jernigan, the deputy chief of prevention and response in the division of healthcare quality promotion at the CDCP, in comments published this morning in the New York Times.

"And it drives home that what we do in health care will have a lot to do with how we control it."

The increased prevalence of the MRSA bacteria, and the ease with which it can be transferred between patients, health care workers and un-sterilized equipment, puts the onus on the health care industry to minimize the spread of MRSA.

In the meantime, focus is turning to the hospital and health care environment as 'ground zero,' in an attempt to mitigate the spread of MRSA.

According to Dr. Lance R. Peterson, an epidemiologist with Evanston Northwestern Healthcare (and revealed in the New York Times today), his hospital system in the Chicago area reduced the rate of invasive MRSA infection by 60 per cent after it began screening all patients in 2005.

Other efforts, such as simple hand washing by hospital and health-care workers, could also contribute towards a mitigation of the spread of MRSA. Studies have shown that workers in busy hospitals ignore basic practice and protocols regarding hand-washing more than half the time.

Consumers Union, the publisher of Consumer Reports, is lobbying for the publication of hand washing compliance rates among hospitals.

Lisa A. McGiffert is the manager of the "Stop Hospital Infections" campaign at Consumers Union. "This study just accentuates that the hospital is ground zero," she says, "that this is where dangerous infections are occurring that are killing people every day."

The MRSA bacteria was first isolated in the U.S. in 1968 and is known to cause 10 to 20 per cent of all infections acquired in the health care setting. It is resistant to a number of front-line antibiotics, and is quite hardy and easily transmitted. Once it gets hold, it can be deadly.

More Hospital Infection News
On Monday a Virginia teenager died after being in hospital for a week with an MRSA infection that quickly spread to his vital organs, and the muscle around his heart. His school district closed 21 schools for a thorough inspection and cleaning, as a precaution.

"This study puts more onus on organizations that don't do active surveillance to demonstrate that they're reducing their MRSA infections," says Dr. Peterson of Chicago. "...MRSA is theoretically a totally preventable disease."

Researchers extrapolated data collected in nine places, estimating that 94,360 patients developed an invasive infection from the MRSA pathogen in 2005. Nearly one of every five, or 18,650 of them, died.

In an editorial accompanying the published study in today's edition of the JAMA Dr. Elizabeth A. Bancroft, an epidemiologist with the Los Angeles County Department of Public Health, called the findings "astounding."

If a loved one has died from a MRSA bacteria infection, please contact a lawyer involved in a possible [Lawsuit] who will review your case at no cost or obligation.
Request Legal Help Now

Posted by
Jeff Jones
on July 2, 2012
Why won't someone get Mr Edwards an attorney for such a clear cut case?
Posted by
mark edwards
on June 22, 2012
My father died at university hospital cincinnati ohio in december.The pathology department sent me a letter stateing that my father went into cardiac arrest when his blood pressure dropped low "due to an infection in his blood.The autopsy reports states "positive culture MRSA"This happened before at a nursing home when he had to go to ER because of low blood pressure (Oct 2011)The nursing home,the kidney dialysis clinic and the hospital are responsible for not identifying MRSA.