MRSA Superbug Still a Problem for Hospitals and Patients 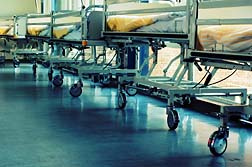 MRSA, or methicillin-resistant Staphylococcus aureus, is caused by a staph infection that is becoming increasingly resistant to antibiotics. It used to be that such infections could be successfully treated with penicillin. However, as antibiotic use rose over the years, the so-called 'bugs' that antibiotics were used to eradicate have become increasingly resistant. Stronger antibiotics, such as methicillin, are generally administered in a hospital setting with an IV.

Increasingly, so-called 'superbugs' are becoming resistant to even those and staph germs are hardy. They can live on and be passed onto patients via hospital gowns worn by doctors and nurses. As well, a patient who occupies a hospital room recently vacated by a patient with an MRSA superbug runs the risk of becoming infected unless the room is thoroughly sanitized—including the floor.

Hospitals around the world are feeling the heat, as patients become sick on their watch within the hospital setting. Many hospitals have been the target of lawsuits and the trend is continuing. Under scrutiny from a scornful patient community, hospitals are attempting various protocols to attempt the eradication of the problem.

Hand washing has been stepped up. The MRSA superbug can be passed on to others from contact with the skin. Hospitals are also experimenting with various protocols for soiled hospital gowns. Rather than dumping them into a laundry hamper, hospitals have found that balling up, and stuffing the used gowns into a disposable glove designed for that purpose can reduce MRSA infection rates by as much as 62 percent.

And there are other statistics that may give cause for hope. A study involving intensive-care patients over a 10-year period appeared to demonstrate a drop in MRSA infection rates, according to a doctor with the US Centers for Disease Control and Prevention (CDC, Atlanta). Between 1997 and 2007, rates of MRSA infection were shown to have dropped by about 50 percent.

According to the study, which was published in the Journal of the American Medical Association (JAMA) at the beginning of the year, 1,684 intensive care units reported a total of 33,587 blood infections that caused central line catheters during the study period.
Of those, 2,498 or about 7 percent were drug-resistant strains of MRSA and 1,590 or 4.7 percent, were staph infections that were susceptible to antibiotics.

But the results, one might argue, could be somewhat confusing. While the number of MSRA cases in a hospital setting was reported to have fallen by half, the overall percentage of infections caused by MRSA actually increased during the ten-year study period.

And it appears as if hospitals have more work to do, according to Dr. Michael Climo of the Hunter Holmes McGuire Veterans Affairs Medical Center in Richmond, Virginia. Dr. Climo acknowledges that substantial progress is being made. And yet, "despite this progress most ICUs are far from the goal of zero infections and many have not implemented suggested prevention strategies."

And MRSA staph infections no longer appear to be the bastion of hospitals, nursing homes and other healthcare environments. Last month, researchers reported an 'alarming' increase in ear, nose and throat infections in children caused by drug-resistant staph germs.

Even the Bingham County Jail in Idaho hasn't escaped the MRSA superbug. The facility was locked down after a handful of inmates became ill.

More HOSPITAL INFECTION News
Thus, MRSA is not just in the hospitals any longer. But the hospital setting remains the first line of defense—beyond personal hygiene—and must remain above reproach in terms of preventing the spread of the horrific, drug-resistant MRSA infection.

A doctor with Pfizer estimates that treating patients with MRSA infections costs the healthcare system between $3 billion and $4 billion each year.

And that's not including settlements stemming from lawsuits. At the end of the day the patient has to trust the hospital to get it right and prevent germs from spreading. Who better than a hospital, to stem the spread of nasty germs that can severely injure or even kill? And yet is has been a problem and continues to be for many hospitals and healthcare providers.

If you have been sickened, or have lost a loved one to an MRSA infection while in hospital, seek the services of a qualified MRSA infections attorney. Hospitals should promote and help achieve wellness—not make you sick.