A Georgia woman who suffered a heart attack and a debilitating brain injury mere days following the birth of her child was awarded, earlier this year nearly $46 million in damages. The Georgia medical malpractice lawsuit named two doctors and an Atlanta health care facility as defendants, whom a jury in Georgia state court in February found negligent. 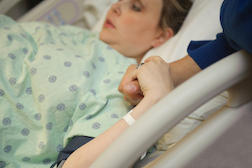 According to court documents, co-plaintiff Shannon Trabue attended Atlanta Women’s Specialists LLC for the birth of her child in August, 2009. An attempt to induce labor subsequently failed, so the child was delivered by cesarean section on August 22 of that year.

Three days later, on August 25 of that year the patient began to experience shortness of breath. An obstetrician, one of three defendants in the Georgia malpractice lawsuit, ordered a chest X-ray and an oxygen mask. However, Trabue’s blood pressure continued to rise, spiking – according to court documents – at 202/105 before the intervention of another IV drug succeeded in lowering Trabue’s blood pressure to 151/79.

Doctors had also ordered a CT scan and Trabue, with her blood pressure beginning to stabilize, was accompanied to radiology in a wheelchair for the CT scan procedure.


“When I read this case, I was just really horrified because this patient had one of the most common complications we see in pregnancy,” said Dr. Katharine Wenstrom.

That’s when an emergency occurred that would result in the debilitating brain injury to Trabue. The young mother suffered a heart attack and required resuscitation. It was determined Trabue went without oxygen for 10 to 12 minutes, and as a result suffered hypoxic brain injury that led to a total disability.

Evidence presented at trial suggested Trabue’s caregivers inserted too many fluids into her system in an attempt to lower her blood pressure, and failed to monitor her properly. It was alleged that an overabundance of fluids triggered pulmonary edema that was deemed to have been the cause of Trabue’s cardiac arrest. Jurists heard that Trabue was unable to breathe in spite of being revived, and that her brain went without oxygen for upwards of twelve minutes.

The Trabues responded with a Georgia medical damaged lawsuit against Atlanta Women’s Specialists LLC and the primary obstetrician, alleging the defendants failed to meet the required standard of care in treating their patient and ultimately contributed to her injuries.

Another obstetrician who relieved the primary obstetrician for a time the night before Trabue’s injury, was later added to the medical malpractice lawsuit by co-plaintiffs Shannon and Keith Trabue and Shannon’s conservator, CertusBank NA.

More GEORGIA MEDICAL MALPRACTICE News
In the end the jury found all three defendants held some responsibility for what happened to Trabue, and awarded a total of $45.8 million. The award breaks down as $6.7 million for future medical expenses, $565,624 for prior medical expenses, and nearly $1 million for past and future lost earnings, as well as $18 million each in compensatory damages to Shannon Trabue and her husband Keith, who claimed responsibility as his wife’s caregiver in that she was no longer in a position to care for herself, or her newborn daughter. Keith Trabue’s share also includes loss of consortium with his wife, who has been described as having the brain capacity of a five-year-old child.

“When I read this case, I was just really horrified because this patient had one of the most common complications we see in pregnancy,” said Dr. Katharine Wenstrom, OB/GYN professor at Brown University who testified on behalf of the plaintiff. “What ultimately led to her downfall was a complication that could have easily been treated...”

It is not known if the defendants appealed the award in the Georgia medical malpractice lawsuit. The case is Trabue v. Atlanta Women’s Specialists, LLC, et al., Case No. 14-EV-001821 in the State Court of Fulton County, State of Georgia.

Posted by
Melanie weller
on July 23, 2017
I am looking for an attorney to handle my malpractice case
Please contact me