Reports Come in About Children Sickened by Veggie Booty 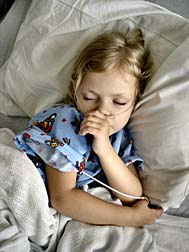 Most of the children who were infected with Salmonella wandsworth reported abdominal cramps, headaches, vomiting, and bloody diarrhea. One woman said her son started with a common rash but developed a fever of over 103 degrees the next day. She said doctors took over a week to determine what was wrong with her son.

In severe cases Salmonella poisoning can cause death. Salmonella can be especially serious when it affects children, people with weak immune systems, and elderly people.

Some stores were continuing to sell Veggie Booty after the recall was announced. One website reader informed people that his mother-in-law purchased Veggie Booty from a Safeway in California on July 4, a few days after the recall was announced. If you see Veggie Booty on store shelves, do not purchase it. Because it is not currently being manufactured there are no new bags in stores, so any product that is still being sold could potentially contain Salmonella.

Meanwhile, the first lawsuit has been filed against the maker of Veggie Booty, alleging the snack food poisoned a child. The couple that filed the lawsuit claimed that their 18-month-old son ate a bag of Veggie Booty on May 20. According to the lawsuit, the boy became ill three days later, suffering from "severe, bloody diarrhea." He was diagnosed at a hospital with Salmonella poisoning.

The lawsuit argues that Robert's American Gourmet Inc., the maker of Veggie Booty, breached its duty to make food that was "free of pathogenic bacteria." The suit seeks at least $75,000 in damages. According to the lawsuit, the boy was exposed to a rare type of salmonella poisoning and was still being treated for his illness over a month after becoming sick.

The recall has also been expanded to include Super Veggie Tings Crunchy Corn Sticks Snack Food. The new product contains the same seasoning as Veggie Booty, which is believed to carry salmonella. According to a company official, the spray-on seasoning used in both products tested positive for bacteria. The seasoning, which contains a blend of kale, spinach, carrots, broccoli, and cabbage, is made with imported Chinese ingredients.

Check back here for more reports as this story develops...

If you or a loved one has suffered damages in this Salmonella case, please contact a lawyer involved in a possible [Veggie Booty Lawsuit] who will review your case at no cost or obligation.
Request Legal Help Now