Women who take Effexor (venlafaxine) may have thought they were safe from the side effects associated with SSRI (selective serotonin reuptake inhibitor) medications. Yet Effexor, a serotonin-norepinephrine reuptake inhibitor (SNRI), is similar enough to the SSRI antidepressants that the risk of serious side effects is still a concern. 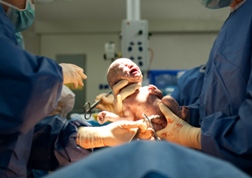 SSRIs and SNRIs do not carry the same side effects as some of the older antidepressants, such as tricyclics or monoamine oxidase inhibitors (MAOIs), which makes them more appealing to doctors and patients. Patients who are on MAOIs, for example, also have to follow a special diet. This is not required of patients who take SSRIs or SNRIs.

SSRIs and SNRIs both inhibit the re-absorption of serotonin, a neurotransmitter that is thought to play a role in controlling anxiety, mood, sleep and appetite. SSRIs basically ensure that there is more serotonin in the brain, which is thought to reverse depressive symptoms and stabilize the patient's mood.

More EFFEXOR PPHN News
Because both SSRIs and SNRIs affect the levels of serotonin, they have similar side effect profiles. This means that patients taking Effexor may face the same risk of side effects, including birth defects. Women who take the medication in the first trimester of pregnancy run the risk of giving birth to babies with heart and lung defects or Persistent Pulmonary Hypertension of the Newborn (PPHN), a condition that inhibits blood flow to the lungs, resulting in oxygen-poor blood returning to the heart. PPHN can cause shock, heart failure, seizures, organ damage and death.

Currently, Effexor is listed by the US Food and Drug Administration (FDA) as Pregnancy Category C, meaning animal studies indicate a risk to the fetus but human studies have not indicated whether the risk involved in stopping medication is greater than the risk of birth defects.

If you have suffered losses in this case, please send your complaint to a lawyer who will review your possible [Effexor PPHN Lawsuit] at no cost or obligation.
Request Legal Help Now