In June 2005, Guidant Corp. recalled 50,000 of its implanted defibrillators, which are used to prevent cardiac arrest in the event of a rapid heartbeat. 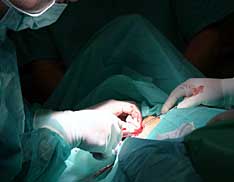 A 48-year-old Georgia woman died after the defective routing on her Guidant defibrillator caused 80 percent of the shock normally administered during a cardiac episode to be delivered to the case of the defibrillator rather than her heart. She received notice of the recalled defibrillators, but on the advice of her electrophysiologist and Guidant Corp., she chose not to replace her defibrillator. 17 days later she suffered a heart attack and died within minutes.

Meanwhile two Texas plaintiffs dropped a civil suit against Guidant Corp. last month after a confidential settlement was reached. Lawyers for the plaintiffs argued that the company knew of the potentially fatal problems with the defibrillators as much as three years before the recall, but failed to notify physicians.

In June of this year, the Associated Press publicized court documents that showed Guidant did draft a letter to warn doctors of a dangerous electrical malfunction in some of its defibrillators, but that letter was never sent. In its place, the company sent a more routine "product update".

Signs that a defibrillator is defective include: rapid heart rate, loss of consciousness, heart failure, electrical shocks from the defibrillator when they are not needed, and an audible beep.

According to Guidant medical reports, at least 69 defibrillators have malfunctioned with two deaths resulting since May 30, 2005. The first indication that there was a problem with Guidant defibrillators came in 2002, when officials detected a potential problem with the wiring of one defibrillator model. Guidant said it would correct the flaw in future models and no warning was issued to doctors until May, 2005. In July 2005, the FDA issued a voluntary recall of some Guidant defibrillators, manufactured between November 25, 1997 and October 26, 2000.

The following models are affected by the recall:

The FDA classified the recall as a Class I recall, the most serious of all three categories. Categorization is based on the probability that device failure could cause adverse health effects. Therefore a Class I recall indicates that there is a likelihood that the malfunctioning defibrillator could cause serious health problems or even death.

If you currently have a Guidant defibrillator implanted, consult your doctor immediately to decide whether or not you should have your defibrillator removed.

If you or a loved one have a pacemaker implanted, please contact a [Guidant Pacemaker] lawyer who will evaluate your claim at no charge.
Request Legal Help Now