American Kids Being Drugged To Death

As result of the marketing power the pharmaceutical industry obtained by spending tens of billions of dollars to gain influence over politicians in power, the FDA and the medical profession, American kids are being pumped full of the most powerful and dangerous psychiatric medications on the market, in drug cocktails that are literally killing them.

Neurologist Dr Fred Baughman, author of "The ADHD Fraud," calls the leadership of the psycho-pharm-government cartel (FDA, NIMH, White House New Freedom Commission on Mental Health) the biggest, most evil drug cartel in history. "At least the pusher of 'crack' on inner city streets does not come in a white coat," he says.

According Dr Baughman, kids have become "for-profit receptacles" for psychiatric drugs which will forever alter their brains and bodies. And its happening all across America he says, not by thousands but by tens of thousands. 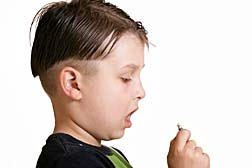 Experts say, the drugging regime usually begins by doctors convincing parents that their children have attention deficit disorder, and the medications prescribed are the exact same drugs that street addicts call "speed." They include the amphetamines Adderall, Dexedrine, and methylphenidates such as Ritalin and Concerta.

FDA records show that, between 1999 and 2003, seventy-eight million prescriptions were written for ADHD drugs for children ranging in age from one to 18. A review of adverse events posted on the FDA web site reveals that, between January 2000 and June 30, 2005, there were nearly 1,000 reports of psychosis or mania possibly linked to ADHD drugs, with psychosis characterized by the inability to distinguish real and imaginary events.

"The most important finding of this review is that signs of psychosis or mania, particularly hallucinations, can occur in patients with no identifiable risk factors, at usual doses of any of the drugs used to treat ADHD," according to a March 3, 2006, memo penned by two members of the agency's ADHD psychiatric review team.

FDA records also show reports of 25 deaths in children and adults between 1999 and 2003, and 54 cases of serious cardiovascular problems, including stokes, heart attacks, hypertension, palpitations and arrhythmia. But according to Dr Baughman, in addition to the deaths cited by the FDA, the MedWatch database also contains 186 more deaths of persons using ADHD drugs for the period between 1990 and 2000.

Dr Grace Jackson, author of "Rethinking Psychiatric Drugs: A Guide for Informed Consent," says that "whether by ignorance or design, the FDA remains oblivious to the evidence-based limitations of ADHD drugs."

She notes that at least 40% of children fail to respond or tolerate stimulant therapy, "and about twice as many respond at least as well to non-pharmacological interventions."

"The link between stimulants, cardiovascular disease, and death," Dr Jackson reports, "is well documented but doctors and government regulators have refused to acknowledge the dangers associated with the drugs."

The long-term outcomes for kids on ADHD drugs, she says, show diminishing effects over time, including "artificial behavioral improvements" which end when the medication is withdrawn.

Because stimulant drugs cause insomnia, sleeping pills are now being fed to children to counteract the insomnia side effect. Medco Health Solutions, a managed-care firm, found an 85% increase in the use of sleeping pills among children between 2002 and 2004.

One of the world's leading authorities on psychiatric drugs, Dr Peter Breggin, founder of the International Center for the Study of Psychiatry and Psychology and the journal Ethical Human Sciences and Services, warns that all ADHD drugs can cause "a continuum of stimulation, which includes agitation and irritability, anger, hostility, disinhibition, hypomania and mania."

The activation syndrome, he says, was observed decades ago with the amphetamines like Adderall and Dexedrine, and methylphenidates such as Ritalin and Concerta.

As an unrecognized side effect to most doctors, the syndrome more often than not results feeding the kids more drugs. As a child's emotional control breaks down due to the stimulant effects, Dr Breggin says, mood stabilizers such as antiseizure medications and antipsychotics may be added to the mix. "Eventually," he states, "these kids end up on four or five psychiatric drugs all at once and toddlers are even being diagnosed with bipolar disorder."

The new generation of "atypical" antipsychotics, originally approved only to treat adults with schizophrenia and bipolar disorder, which include Zyprexa (Eli Lilly), Risperdal (Johnson & Johnson), Seroquel (AstraZeneca), Abilify (Bristol-Myers Squibb), Clozaril (Novartis) and Geodon (Pfizer), were not approved for any condition in children, but studies of Medicaid records and HMO databases found an alarming increase in the use of these drugs by kids, particularly for behavioral disorders such as ADHD, according to the spring 2006 issue of the Journal of Ambulatory Pediatrics.

Researchers led by Dr William Cooper at Vanderbilt University analyzed data on health care services rendered in the US and found that between 1995 and 2002, there were 5,762,193 outpatient visits where children between the ages of 2 and 18 were prescribed an antipsychotic.

The researchers explained that there had been no increase in mental disorders and noted that, "schizophrenia and psychosis accounted for only 13.5% of the total antipsychotic visits during the study period, so this diagnosis alone could not explain the increase."

A USA TODAY analysis of the FDA's adverse event reporting system between 2000 and 2004 found at least 45 deaths of kids where the "primary suspect" was an atypical and more than 1,300 reports of other serious side effects.

Dr Breggin has served as an expert witness in several cases that resulted in favorable verdicts for the plaintiffs in which Risperdal caused a condition known as tardive dyskinesia in children, when it was prescribed in attempt to control behaviors that were in fact caused by ADHD drugs.

He explains that tardive dyskinesia is a neurological movement disorder that is often mistaken for a mental illness because the symptoms are so "strange" and "bizarre." The abnormal movements, he says, can affect any muscle group in the body and impair the ability to speak, walk, breathe and swallow.

According to Dr Breggin, this serious disorder occurs at a cumulative rate of between 4% and 7% in otherwise healthy patients taking antipsychotics each year and after only a few years, 20% or more of patients will be afflicted.

The drug makers have apparently found ways to influence the prescribing habits of Canadian doctors, because the new antipsychotics are now being doled out in record numbers to Canadian children for behavior and mood problems, with a significant proportion for children under nine, according to new research from Canada.

On June 18, 2007, Sharon Kirkey of CanWest News reported that ninety-four per cent of 176 child psychiatrists in Canada surveyed are prescribing the antipsychotics for a variety of disorders and symptoms, including anxiety, attention-deficit hyperactivity disorder and "poor frustration tolerance," citing a study in the Canadian Journal of Psychiatry

Risperdal was the most commonly prescribed, followed by Zyprexa and Seroquel. The report said that a "surprising" number of the prescriptions were for the very young, with 12% written for children aged eight or under, including three-year-olds, and noted that none of the drugs has been officially approved for use in children in Canada.

Lilly, J&J and AstraZeneca are currently named as defendants in Medicaid fraud lawsuits related to the illegal off-label marketing of Zyprexa, Risperdal and Seroquel, filed to recover money paid for patients' use the drugs, as well as the costs of medical care for patients injured by them.

In addition, investigations in several states have recently started looking into the behind-the-scenes financial relationships between the drug makers and some of the doctors who have been heavily involved in promoting the prescribing of the drugs for off-label uses.