Just a few weeks after the US Food and Drug Administration (FDA) issued an exhaustive study regarding the effectiveness of cough and cold medications for children under two, the manufacturers of many cough and cold syrups for toddlers have pulled them from the market.

Yesterday the Consumer Healthcare Products Association (CHPA) announced that many products with names well known by parents would no longer be sold. The list includes infant drops sold under the leading brand names Dimetapp, Pediacare, Robitussin, Triaminic, Little Colds, and versions of Tylenol that contain cough and cold ingredients.

The American Academy of Pediatrics (AAP) argues that cough and cold medicines are, in truth, simply ineffective for young children, and can pose health risks for both babies and toddlers. 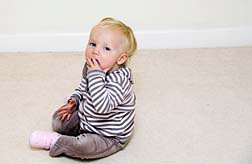 The FDA report, released just a few weeks ago and recommending a ban of all oral cough and cold products aimed at children under the age of two, was prompted by incident reports and in some cases, the deaths of toddlers after being administered what amounted to lethal doses of the apparently safe products.

The problem stems from the confusion that often accompanies a busy life that is made all the busier when a young child comes down with a cold. There could be more than one caregiver doling out the medicine, and sometimes one doesn't have a tight handle on what the other is doing. A baby can't tell Daddy that Mommy just gave me some of this stuff a half hour ago.

In another scenario, a medication that directs dosages at six hours apart might be administered more often if a parent feels that the medication isn't working, and may decide to increase the frequency.

What's more, caregivers have been known to use more than one product in an effort to treat different symptoms. However, the same family of antihistamines, decongestants and cough suppressants can be found in similar products.

And then there's the old reliable household spoon from the kitchen drawer: a mainstay of the sick room for years. However, while manufacturers include droppers and measuring spoons in an effort to secure accurate dosages, those measuring devices can be lost or simply not used in deference to the inaccurate kitchen spoon.

All this can combine, in essence, to poison a child - and in some cases the inadvertent overdoses have proved fatal in babies and young children.

The CPHA, which previously resisted the ban on infant medicines--favoring instead the use of effective warning labels--stuck to its previous mantra that in its view the medicines are safe when used as directed. Still, it deferred to the manufacturers in announcing the voluntary halt to sales of infant cold medications.

Officials from the City of Baltimore, together with the Maryland Chapter of the AAP, recently petitioned the FDA, arguing that not only are the medications ineffective in young children, they can also pose a risk to babies as well as preschoolers.

Not surprising, the AAP takes a different view from that of the CPHA. The American Academy of Paediatrics holds that numerous studies have returned the same conclusion: that cough medicines and suppressants are ineffective for infants. The Academy's national president, Dr. Jay Berkelhamer, put forward those comments in a communique to the FDA last month.

Indeed, by attempting to suppress a cough, a caregiver is attempting to counteract the body's own, inherent way of clearing the lungs--by coughing. A low-grade fever is the body's way of fighting off an infection.

The FDA is bringing its scientific advisers together next week to debate the issue in greater detail, over two days, October 18th and 19th. While the FDA has, to this point, focused their findings and overall position on children under the age of six, it will open debate on the possibility, and the potential for any supporting data, that these medicines should not be given to children under the age of 12.

The FDA is on record as commending the manufacturers for voluntarily ending sales of infant could and cold products.

If your child has overdosed on cough or cold medicine, please contact a lawyer involved in a possible [Lawsuit] who will review your case at no cost or obligation.
Request Legal Help Now