On August 21, 2007, the Associated Press reported that drug companies spend a lot of money on the members of Minnesota advisory panels who help select the drugs which are to be used by patients covered by Medicaid.

The news agency's review of financial disclosure records in Minnesota found that a doctor and a pharmacist on the 8-member panel simultaneously received large checks from drug companies for speaking about their products.

According to the report, Minneapolis psychiatrist John Simon, appointed to the panel in 2004, earned $354,700 from drug makers that included Eli Lilly and AstraZeneca, from 2004 to 2006, in honoraria, speaker and consulting fees, as well as other payments ranging from $500 to $93,012. 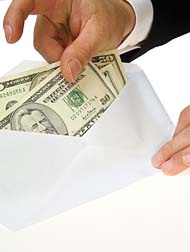 The records also showed that Robert Straka, a University of Minnesota pharmacy professor, was paid $78,000 by drug companies while he served on the panel from 2000 to 2006. He told the Associated Press that he was paid for "educational talks" and that he routinely discloses his ties with drug companies and did so as a panel member, both verbally and in writing.

The Associated Press reported that roughly a third of the drugs on Minnesota's preferred drug list were sold by companies which paid Mr Simon or Mr Straka, but the news agency could not track any link between the payments and their votes because the minutes from the advisory panel meetings did not record how the 8 members voted.

These drugs were originally FDA-approved for the limited use of treating adults with schizophrenia or the manic phase of bipolar disorder. However, the massive over-prescribing of this enormously expensive class of drugs for unapproved uses has caused many states to remove them from the Medicaid preferred drugs lists and requires doctors to obtain prior authorization before prescribing them to Medicaid patients.

In fact, roughly 10 states are now suing several atypical makers for Medicaid fraud to recoup the cost of purchasing the antipsychotics prescribed off-label to Medicaid patients and also to recover the money paid for medical care of the persons injured by the drugs.

The lawsuits allege that the drug makers illegally influenced doctors to prescribe the drugs off-label to patients of all ages, for conditions such as behavior and mood disorders, eating disorders, anxiety, post traumatic stress disorder, insomnia, PMS, dementia, and many other unapproved indications, and concealed the adverse effects associated with the drugs.

The atypical makers are also facing tens of thousands of lawsuits filed by patients, private insurance carriers and company shareholders for similar allegations.

According to Lilly's August 6, 2007, SEC filing, since August 2006, Lilly has received civil investigative demands or subpoenas from a number of states. "Most of these requests are now part of a multistate investigative effort being coordinated by an executive committee of attorneys general," the filing states.

"We are aware that approximately 30 states," Lilly wrote, "are participating in this joint effort, and it is possible that additional states will join the investigation."

The filing notes that the attorneys general are seeking a broad range of Zyprexa documents, "including documents relating to sales, marketing and promotional practices, and remuneration of health care providers."

Presumably, that would also include the "remuneration" of Minnesota shrinks like Dr Simon. According to the August 27, 2007, Pioneer Press, since 2002, Dr Simon has received more than $570,000 from six drug makers, with most of the money coming from Eli Lilly, "whose antipsychotic drug Zyprexa is the most costly each year for Minnesota's fee-for-service health program for the poor and disabled," the article states.

In fact, Lilly's disclosure records for 2004 show payments to Dr Simon totaling a whopping $91,854.95 in that one year, and he also received another couple grand from Seroquel maker AstraZeneca.

Dr Simon told the Pioneer Press that companies pay him to speak about their drugs at conferences and clinics or about the conditions that are treated with the drugs. "Most of the psychiatrists who are really good," he said, "have ties to industry."

Whether Dr Simon is a "really good" psychiatrist is certainly open to debate. In 1997, the state medical board made him complete a clinical training program and issued a report which said that Dr Simon, "frequently makes abrupt and drastic changes in type and dosage of medication which seem erratic, not well considered and poorly integrated with nonmedication strategies."

The board also noted that Dr Simon prescribed addictive drugs to addicts and failed to stop giving medicines to patients when they were suffering severe drug side effects. He said in an interview with the Times that the board's action was a learning experience and that drug makers continued to hire him to speak because he was respected by his peers.

For years, Dr Simon reportedly shared an office with another "really good" psychiatrist by the name of Dr Faruk Abuzzahab. On June 3, 2007, Gardiner Harris and Janet Roberts published a story in the New York Times with the headline: "After Sanctions, Doctors Get Drug Company Pay," and stated:

A decade ago, the Minnesota Board of Medical Practice accused Dr. Faruk Abuzzahab of a "reckless, if not willful, disregard" for the welfare of 46 patients, 5 of whom died in his care or shortly afterward. The board suspended his license for seven months and restricted it for two years after that.

The Times reports that separately, in 1979 and 1984, the FDA concluded that Dr Abuzzahab had violated the protocols of every study that the agency audited and that he reported inaccurate data to drug makers.

The FDA said he routinely oversaw 4 to 8 trials at the same time, moved patients from one study to another, gave experimental drugs to patients at their first consultation and once hospitalized a patient for the sole purpose of enrolling him in a study.

As recently as June 2006, the medical board criticized Dr Abuzzahab once again for writing prescriptions for narcotics and this time to patients he knew were using false names, according to the Times.

All that said, Dr Abuzzahab told the Times that he has helped study many popular psychiatric drugs, including Lilly's Zyprexa and Prozac, Janssen's Risperdal, AstraZeneca's Seroquel, Glaxo's Paxil and Pfizer's Zoloft.

A review of the Minnesota disclosure records for 2004 show that the drug makers apparently thought it was beneficial to keep paying big bucks to Dr Abuzzahab. Glaxo paid him $1,000, Pfizer gave him $750, and Wyeth forked over $18,084, in that year alone.

In 2003, psychiatrist Dr Ronald Hardrict pleaded guilty to Medicaid fraud. But a little charge like fraud apparently did not effect this Minnesota psychiatrist's earning power either. The very next year, disclosure records for 2004 show Risperdal maker Janssen paid him $10,000; Seroquel maker AstraZeneca gave $1,250; Abbott Labs paid him over $7500; Glaxo paid $1,500, and Wyeth forked over $8,846.

In reviewing the Minnesota disclosure records for 2004, the name Dr Dean Knudson kept popping up. A September 2004 Newsletter from the Ada Canyon Medical Education Consortium listed Dr Knudson as an associate professor of psychiatry at the University of Minnesota Medical School.

The newsletter showed that Dr Knudson was paid to give educational presentations on dementia. On October 18, 2005, the Associated Press reported a study that showed atypicals used to treat elderly patients with dementia raised their risk of death.

For the study, the researchers pooled the results of 15 studies on the atypicals Zyprexa, Risperdal, Seroquel and Abilify and among more than 5,000 dementia patients, those taking any of the four drugs faced a 54% increased risk of dying within 12 weeks of starting the drugs, compared to patients taking placebos.

Another name that jumps out in the 2004 disclosure records is Dr David Adson. According to the August 20, 2007, Pioneer Press, Dr Adson, of the University of Minnesota, also has a state advisory role as the clinical leader of a program funded by Lilly and provided free of charge to Minnesota, which notifies doctors when their prescriptions for psychiatric drugs are out of line with clinical standards.

Although the program is funded by Lilly, it is supposedly run by an independent company called Comprehensive NeuroScience, Inc. All totaled, 20 states have contracts with CNS to identify doctors "who are prescribing psychiatric drugs outside of recommended guidelines for safety and effectiveness," according to the Press.

Critics say the program is actually a scam set up with state policy makers to make sure the expensive psychiatric drugs remain on the Medicaid covered drug lists instead of being placed on the lists that require prior authorization.

Ben Hansen, a member of the Michigan Department of Community Health Recipient Rights Advisory Committee, has been investigating the atypical makers' involvement in the Medicaid programs in Michigan and other states and says that none of the states with CNS contracts require prior authorization for the atypical drugs.

Mr Hansen published some of the results of his investigation in the Spring 2007 Newsletter of the International Center for the Study of Psychiatry and Psychology. By using the FOIA, Mr Hansen says he has obtained nearly a thousand pages of documents which show that Medicaid is being "milked like a huge cash cow."

Back in 2002, Mr Jones found that Janssen was using CNS to funnel payments to state officials who controlled the Medicaid preferred drug lists in Pennsylvania to ensure that Risperdal would be on the list.

Also, in 2006, Dr Adson received $83,325 from AstraZeneca and roughly $6,100 from Bristol-Myers, according to a compilation of disclosure forms by the Pioneer Press and the watchdog group Public Citizen.