More FOOD SUPPLEMENT News
Fitness trainer and star of the television program "The Biggest Loser", Jillian Michaels, could be facing as many as three food supplement lawsuits over her signature line of weight reduction pills. 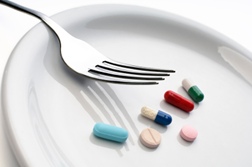 A woman named Christie Christensen has filed a class action suit claiming that Michael's Maximum Strength Calorie Control dietary supplement is ineffective and its advertising is misleading. One day after the claim was filed, a second woman announced her intention to file a similar suit.

The case's main fault with the dietary supplement is its somewhat dubious claim to enact weight loss through the intake of two capsules before major meals.

"Contrary to everything that Ms. Michaels has ever instructed, she and the companies peddling this product suggest it makes weight loss effortless," claims Christensen's attorney, Melissa Harnett, in a statement to Snark.com. "Ms. Michaels knows better - taking two pills before eating does not miraculously cause weight loss."

A woman named Kathy Hensley filed a third suit claiming that the diet pills contain an unsafe amount of citrus aurantium, a "potentially lethal" ingredient that can lead to high blood pressure and cardiac problems, according to Us Magazine.

Click to learn more about LawyersandSettlements.com
LawyersandSettlements.com - A trusted, independent legal news provider bringing quality news and information on all legal cases and lawsuits filed in United States of America to its readers since 2002. Over 250,000 legal help requests including , and Drugs & Medical Cases have been forwarded to lawyers all across to the country.